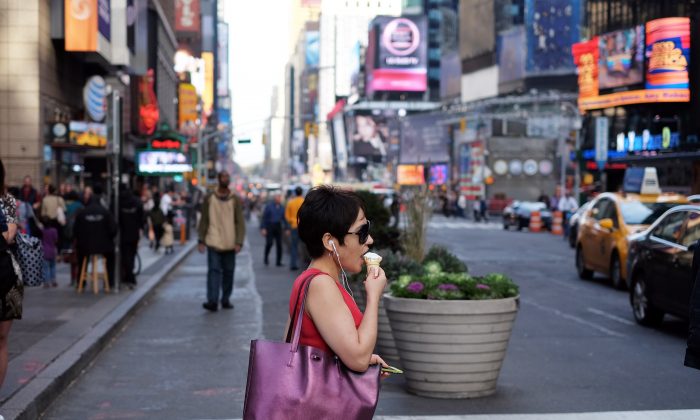 A woman has an ice-cream on a cone as she walks along a street in New York on November 6, 2015. (JEWEL SAMAD/AFP/Getty Images)
Environment

WASHINGTON—Even in a record-breaking hot year for Earth, October stood out as absurdly warm.

The National Oceanic and Atmospheric Administration said that last month globally was 58.86 degrees Fahrenheit (F) (14.98 degrees Celsius). That’s the hottest October on record by a third of a degree over the old mark, “an incredible amount” for weather records, said NOAA climate scientist Jessica Blunden.

October’s temperature was the most above-normal month in history. It was 1.76 degrees Fahrenheit (0.98 degrees Celsius) above the 20th-century average.

“A complete blowout,” said Jeffrey Sachs, director of Columbia University’s Earth Institute. “This year is going to be an all-time record-breaker.”

This was the eighth month this year when a heat record was set, with only January and April not setting records. That’s a record number of broken records in any year. Records go back to 1880.

Blunden and other scientists blame a potent and strengthening El Niño on top of accelerating man-made global warming.

“This is just a new normal,” Blunden said. “I don’t know what really else to call it.”

Nearly every team that measures temperatures found that October 2015 was a record, including NASA, the Japanese Meteorological Agency, University of California at Berkeley, and University of Alabama at Huntsville, which measures the upper air using satellites, Blunden said.

The Cost of Bad Weather

Record heat was found in Australia, southern Asia, parts of western North America, much of central and southern Africa, most of Central America and northern South America, according to NOAA. Washington state had its hottest October on record, while California, Oregon, Idaho, Montana, and Wyoming had their second-hottest Octobers.

It’s also the hottest January through October for Earth on record, along with the hottest consecutive 12 months on record.

Given that El Niño continues to strengthen and how much warmer 2015 is than previous years, Blunden said “It is virtually  just impossible that we will not break the record” for the hottest year. That record was set in 2014. Since the year 2000, global monthly heat records have been broken 32 times, yet the last time a monthly cold record was set was in 1916.