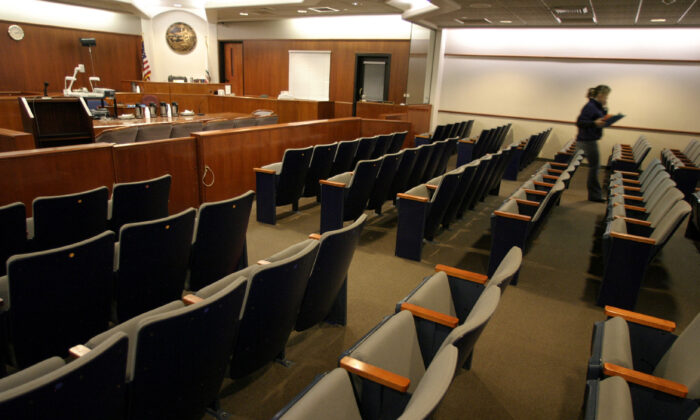 A view inside a courtroom at the Superior Court of California courthouse in Santa Maria, Calif., on Jan. 30, 2005. (Spencer Weiner-Pool/Getty Images)
Viewpoints

Sometimes you wonder if anyone is serious in the California Legislature. On Gov. Gavin Newsom’s desk for signature or veto sits Assembly Bill 2799, introduced by Assemblymember Reggie Jones-Sawyer (D-Los Angeles). It passed unanimously in both the Assembly and Senate, with no Republican opposition. It would ban rap lyrics being used by prosecutors at a trial without a judge’s approval.

But consider some other cases. The Beatles song “Helter Skelter” drove mass-murder Charles Manson to believe he could start a race war by murdering actress Sharon Tate and four others in 1969.

After Stephen King’s novel “Rage” inspired students to shoot up their schools, he took it out of print.

The killers in the 1999 Columbine High School mass murders code-named their atrocity “NBK,” after the 1994 Oliver Stone-Quentin Tarantino film “Natural Born Killers,” about two psychos who go on a killing spree.

Art, whether high or low, is part of being human. It can inspire people to be good or bad. The First Amendment protects free speech, so even the worst of it can’t be banned, with only a few exceptions. There also is a general derision of “bowdlerizing” works, meaning modifying them so they don’t offend, as occurred in Victorian England. Although Hollywood remakes nowadays actually do that as well, so as not to offend the tender consciences of viewers.

Rap lyrics obviously ought to be admissible in a court trial without a judge’s approval. If it has no bearing on the matter at hand, a judge always can throw it out. Appeals also are available.

As early as 1991, prosecutors have used rap lyrics both to reveal a defendant’s mindset and as confessionals: They wanted juries to believe that rappers quite literally did the things they were rapping about.

In the 2000s, Louisiana prosecutors repeatedly used the lyrics of New Orleans rappers against them in murder trials, including Corey Miller, McKinley Phipps Jr. and, most recently, Torrence Hatch, who raps as Lil Boosie.

Ok, let’s look at New Orleans. Tucker Carlson reported on Aug. 23 on what the city has become because of runaway, un-prosecuted violence. Carjackings occur an average of once every hour.

And “reformers” want to handicap prosecutors by making it harder to convict the murderers?

AB 2799 actually isn’t just about rap lyrics. The Assembly Floor Analysis says the bill “[d]efined a ‘creative expression’ as the expression or application of creativity or imagination in the production or arrangement of forms, sounds, words, movements, or symbols, including, but not limited to, music, dance, performance art, visual art, poetry, literature, film, and other such objects or media.”

The Floor Analysis describes one case in which an “expert also claimed that the defendant’s display of a ‘B’ hand symbol proved his affiliation with the Broad Day gang. The article notes that former President Bill Clinton, Golden State Warrior Steph Curry, actor William Shatner, and singer Beyonce Knowles have all been pictured making the same exact hand symbol and are not known members of the Broad Day gang. Sadly, the defendant in this case was convicted of murder with enhancements for gang activity and sentenced to life in prison.”

It’s a silly argument, like saying the “Helter Skelter” reference should not have been used in Manson’s trial because literally tens of millions of Beatles fans listened to it and didn’t kill anybody.

So I guess now whatever inspired Manson to commit mass murder wouldn’t be admissible in court, and he would have to be released to kill and kill again. Fortunately, he died in 2017.