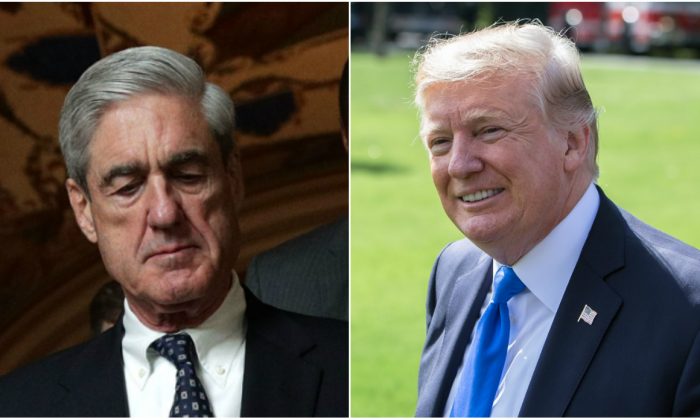 A classified four-page document reviewed by members of Congress on Jan. 18 could spell the end to Robert Mueller’s Special Counsel investigation into President Donald Trump and his associates, according to sources who viewed the document and spoke to national security correspondent Sara Carter.

At least six House members have officially called for a public release of the memo with some saying it will lead to the removal of senior government officials and criminal proceedings. Carter reported that 50-60 members of the House have reviewed the document and are calling for its release.

The document is said to be a review of extensive abuses of the government surveillance program administered under the Foreign Intelligence Surveillance Act (FISA). The memo contains information on the discredited Fusion GPS dossier which was used to apply for a warrant to spy on members of Trump’s campaign.

“I have read the memo. The sickening reality has set in,” Rep. Steve King (R-Iowa) wrote on Twitter. “I no longer hold out hope there is an innocent explanation for the information the public has seen. I have long said it is worse than Watergate. It was never Trump and it was always Hillary.”

“I viewed the classified report from House Intel relating to the FBI, FISA abuses, the infamous Russian dossier, and so-called ‘Russian collusion.’ What I saw is absolutely shocking,” Rep. Mark Meadows (R-N.C.) wrote on Twitter. “This report needs to be released–now. Americans deserve the truth.”

The Hillary Clinton campaign financed the Fusion GPS dossier, which was authored by a former British spy. The dossier contains a battery of unsubstantiated allegations. The dossier has been the focus of multiple investigations and intense media scrutiny for over a year, yet no evidence has been surfaced to substantiate any of its claims.

Given the document’s lack of credibility, many questioned its use to apply for a warrant to spy on the Trump campaign, especially if the people behind the application knew that it lacked merit. According to several sources cited by Carter, the House Intelligence Committee memo reviews “several problematic” issues with how the spy warrants were “packaged, and used.”

Trump said in a series of tweets on March 4, 2017, that former president Barack Obama was “wire tapping” the Trump Tower offices shortly before the election.

“How low has President Obama gone to tap my phones during the very sacred election process,” Trump wrote. “This is Nixon/Watergate. Bad (or sick) guy!”

Trump’s claims were dismissed by mainstream media at the time. Two months later, Mueller was appointed as the special counsel to investigate Russian interference in the 2016 election, in part to quell controversy started by the dubious dossier.

“The classified report compiled by House Intelligence is deeply troubling and raises serious questions about the upper echelon of the Obama DOJ and Comey FBI as it relates to the so-called collusion investigation,” Rep. Ron DeSantis (R–Fla.) wrote on Twitter.

Now, Congress members are calling for a release of the House Intelligence report that will shed additional light on the Fusion GPS dossier and abuse of government surveillance.

“While the report is classified as Top Secret, I believe the select committee should, pursuant to House rules, vote to make the report publicly available as soon as possible,” Zeldin added. This is a matter of national significance and the American people deserve the truth.”