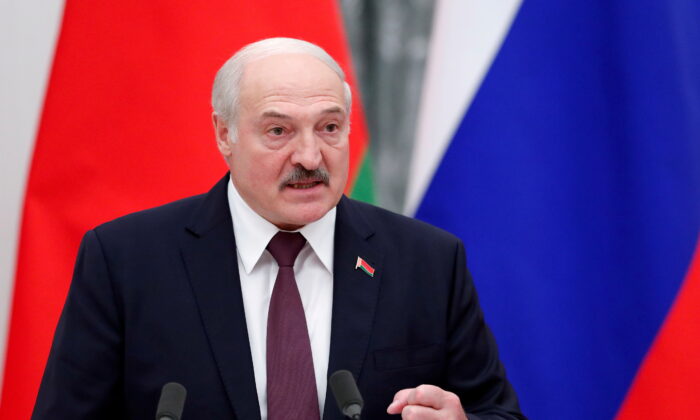 Belarus’ leader Alyaksandr Lukashenka said on Friday it is “absolutely possible” that troops at the Polish-Belarusian border have helped illegal immigrants into the European Union (EU), according to reports.

In an exclusive interview with the BBC, the authoritarian leader said that Belarusian troops know illegal immigrants are trying to reach Germany, adding that “maybe someone helped them,” but he denied the country had invited them to provoke a border crisis.

Thousands of illegal immigrants, mostly from Iraq and Afghanistan, have gathered on the Polish–Belarusian border in hopes of crossing into the EU.

The EU and the North Atlantic Treaty Organization (NATO) have accused Minsk of mounting “a hybrid attack” by flying illegal immigrants to Belarus and luring them to the border with a false promise of easy entry as a way to put pressure on the 27-member bloc as an act of revenge for sanctions over a clampdown on Belarusian protests in 2020 against the contested reelection of Lukashenka.

Minsk has repeatedly denied the accusation and Lukashenka said during Friday’s interview that Belarusian authorities haven’t invited thousands of people into the country.

“I told them [the EU] I’m not going to detain migrants on the border, hold them at the border, and if they keep coming from now on I still won’t stop them, because they’re not coming to my country, they’re going to yours,” Lukashenka stated.

“But I didn’t invite them here. And to be honest, I don’t want them to go through Belarus,” the leader claimed.

In a phone conversation on Monday with Germany’s acting Chancellor Angela Merkel, Lukashenka allegedly agreed that Belarus would negotiate with the EU a solution to the border crisis, according to Belarusian press agency Belta.

“The Belarusian president and Germany’s acting chancellor agreed that the problem will be addressed at the level of Belarus and the EU and that the two sides will designate officials who will immediately enter into negotiations in order to resolve the existing problems. The desire of refugees to get to Germany will be addressed in the same context,” said the press service of the Belarusian leader.

The number of illegal immigrants trying to cross the border in an attempt to enter the EU has increased, according to Polish authorities.

Recent clashes, allegedly sparked by Belarusian forces, has led to at least 12 injuries, including seven police officers, and about 100 arrests after people at the Belarusian side started throwing stones at Polish forces massed on their side of a wire-fenced barrier installed by troops earlier this year in order to prevent a growing surge of illegal immigrants trying to cross the border, the Polish Ministry of Defense said on Thursday.

Video footage released by Polish authorities showed illegal immigrants using sticks to try to break through the barrier. They also threw bottles and logs across the border fence.

The United Kingdom on Thursday reportedly agreed to deploy 100 additional soldiers to Poland’s border with Belarus to help tackle the crisis, the Daily Telegraph reported. Details of the deployment are still being worked out.

Ella Kietlinska contributed to this report.