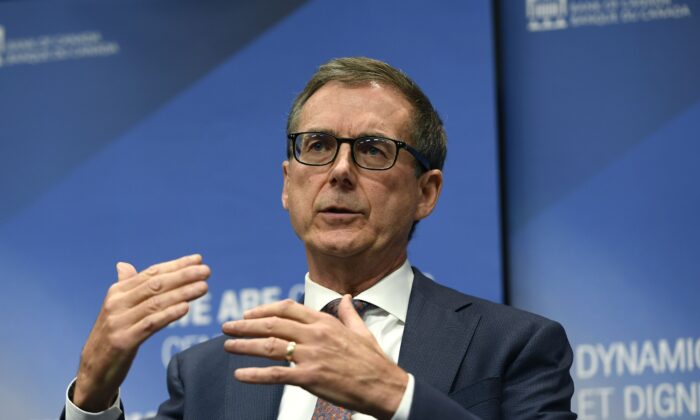 The current higher inflation rates experienced by Canadians may not be transitory if the government and central bank do not modify their policies to address it, says a report released on Dec. 2.

Titled “The Outlook for Inflation and Its Links to Monetary Policy” and released by the Fraser Institute, the report says there are a host factors that could prolong higher inflation.

“While COVID’s effect on the economy has certainly contributed to the rising cost of goods and services, if central banks and governments continue their aggressive policies, higher inflation could persist even after the pandemic subsides,” said Steven Globerman, professor emeritus at Western Washington University and resident scholar at the Fraser Institute.

The report examined the current factors causing inflation and upcoming factors that could create inflationary pressures in the longer term.

To put things into perspective, the report looked at inflation data from the past 50 years and showed that in 1971, which began a decade of high inflation (8.06 percent), inflation in Canada was at 2.7 percent. The current rate is 4.7 percent.

The report said this doesn’t mean that inflation is necessarily on course to repeat what was experienced in the 1970s and 1980s, but that “it is a caution that seemingly transitory episodes of inflation can evolve relatively quickly into more sustained and more rapid inflation if appropriate policy measures, particularly monetary policies, are not implemented.”

Central bankers  in Canada and other developed economies have claimed the recent inflationary bout is “transitory” without precisely defining the term, said the report, adding that the Bank of Canada (BoC) and the U.S. Federal Reserve have said inflation would moderate into 2022.

“I think to a lot of people, transitory means it’s going to be over quickly and maybe I don’t know exactly what the right word is, but it’s probably something like, you know, transitory but not short-lived,” said BoC governor Tiff Macklem in an interview with CTV in early November.

The view that supply chain issues are a key inflation driver is shared by Macklem.

While the report recognizes that the issue of low supply can create inflationary pressures, as in the 1970s when the price of oil skyrocketed, it examined oil prices and inflation over time and concluded that the correlation in this domain has not been persistent.

This suggests that “supply side shocks can have short-run effects on inflation but that the longer-run effects are moderated by adjustments made by market participants, that is, in the case of crude oil, a reduction in the intensity of oil usage in the U.S. economy,” it said.

The report considers factors other than supply that will likely have an impact on rising inflation in the coming years, such as slower economic growth spurred by a lower birth rate and government policies unfavourable to businesses.

The report also cites a study showing that while research is increasing, “research productivity is declining sharply.” This means that technological advances wouldn’t be able to compensate as much for a decrease in productivity.

“If central banks want to ensure that today’s higher inflation is transitory, they need to stop injecting unprecedented amounts of money into the economy and return to a more measured monetary policy,” Globerman said in a news release.

The report says “massive” government pandemic support programs—from revenue support for workers and businesses to backing bank loans and insuring mortgages—were financed by the central banks, which bought government bonds, and the money borrowed was converted into commercial bank deposits by the programs’ beneficiaries, leading to a sharp increase in the money supply.

If that increased money supply chases limited or unavailable goods, inflation occurs. The soaring cost of housing in Canada has been blamed on low supply, and the demand has been boosted by the government’s pandemic support programs, the report said.

A central bank’s buying of government bonds and longer-term securities is known as quantitative easing (QE), which is meant to increase the money supply and encourage lending and investment. In late October, the BoC said it was ending QE, but the report says the “speed and degree of tapering remain uncertain.”

“Absent a sharp reversal of central bank programs of quantitative easing, forecasts that inflation will return to the 2 percent target rate of central banks by mid-2022 at the latest are likely to prove spectacularly wrong,” it said.

The report said some oppose changing current monetary policies given that a correction would seriously increase debt levels and discourage the government from borrowing to fund “income-support programs, green energy initiatives, and other government priorities.”