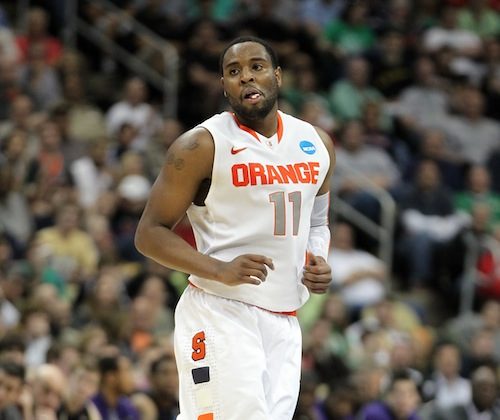 Two games into a tournament chock full of upsets, the Syracuse Orange have survived the Cinderellas and are into the round of 16. Though it’s usually expected that the best teams survive the first weekend, it’s certainly not a given.

As soon as the number-one seed is slapped on a team, expectations suddenly rise and any mistakes are greatly exaggerated.

The pressure can easily buckle a team.

Fortunately for head coach Jim Boeheim’s squad they have a nice distraction this season that tempers expectations and gives the team an us-against-the-world mentality—the absence of Big East Defensive Player of the Year Fab Melo.

After their brush with NCAA tournament history Thursday, in which the Orange needed a second-half rally to avoid becoming the first top-seed to lose to a 16-seed, Boeheim found himself answering questions about his center rotation in absence of Melo. “The fact that this game was close had nothing to do with the center position,” said Boeheim according to the NCAA’s website.

Two days later his team methodically dispatched a Kansas State squad, one that had bested third-ranked Missouri twice this season and won at Baylor, by a comfortable 16-point margin. Though the Wildcats were close at times in the second half, guard Scoop Jardine kept his cool and the team prevailed, rather handily.

Would the addition of Fab Melo and his 2.9 blocks per game have helped the team in their first two games? On paper, it’s a no-brainer. The seven-foot Melo controls the paint on defense and would seem to have neutralized Kansas State’s center Jordan Henriquez who went off for 14 points and 17 rebounds Saturday against the suddenly-soft middle of the Syracuse zone.

Despite that performance, the deeply-talented Orange ‘stayed right there’ as Jardine said, and calmly executed their game plan.

Historically speaking, Syracuse hasn’t always ‘stayed right there’ in the pressure of the NCAA tournament.

Since the tournament expanded to 64 teams in 1985, this season is the just the second time that Syracuse has garnered a number-one seed. The last time was two years ago, when mid-major Butler, a number-five seed, took them down in the sweet 16.

Though the Bulldogs came within a last-second shot of winning the title that year, the 30-5 Orange were the better team on the season and the loss was certainly an upset.

A closer look at their NCAA tournament history shows a disturbing trend.

The Orange have been a number-two seed five times (’86, ’87, ’89, ’90, ’91) with a respectable combined record of 11-5 in those games. But only twice did they play to their seed (advancing to the regional finals) during those five times and in 1991 they made history by becoming the first two-seed to lose to a 15th-seed.

Syracuse has actually performed better in their four tries as a number-three seed, compiling an 11-3 record and playing to their seed two of the four times. Though they lost in the round of 32 to 11th-seeded teams in ’88 as well as last year, they won it all in 2003 and played to their seed in 2009, falling to second-seeded Oklahoma in the regional finals.

Up next for Syracuse is a clash with Wisconsin, in which the Orange will have to ‘stay right there’ with Badgers’ guard Jordan Taylor to win.