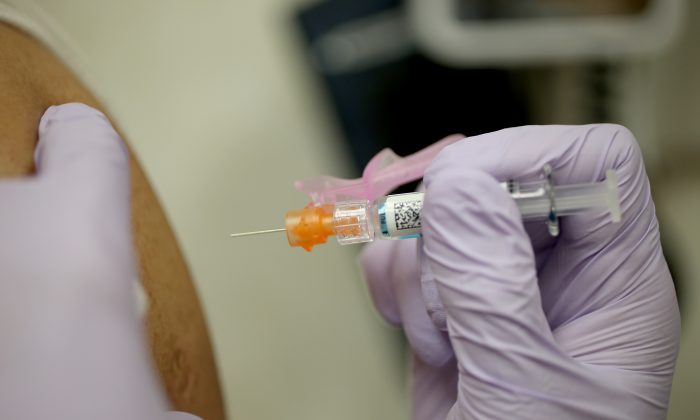 A person receives an influenza shot from a nurse on Jan 6, 2014. (Joe Raedle/Getty Images)
US News

About 50 Employees Fired for Not Getting Flu Shot

A health care provider in Minnesota has fired about 50 employees after they reportedly refused to get the flu vaccine.

Essentia Health had a set Nov. 20 deadline for employees to be vaccinated, receive an exemption for medical or religious reasons, or leave the company, reported KBJR.

“Purely voluntary or more education doesn’t get you those high levels of immunization compliance and as you know other states, other health care organizations have done the same thing we have,” Prabhu, an infectious disease specialist, told the news station.

Prabhu also said that 99.5 percent of employees have chosen the first two options, but about 50 employees have been terminated with more left waiting to hear back on their exemptions as of Nov. 21.

A number of unions representing members at Essentia have spoken up against the mandatory policy.

On Oct. 20, United Steelworker filed a temporary injunction to allow union and management to resolve the dispute under the terms of the collective bargaining agreement, however, a federal judge denied the motion on Nov. 9, KBJR reported.

Other unions have also taken action against Essentia.

The American Federation of State, County and Municipal Employees and Minnesota Nurses Association (MNA) both filed unfair labor practice claims on behalf of their employees claiming Essentia failed to negotiate with union members before establishing and enforcing the mandatory policy.

MNA’s chief, Steve Strand, told KBJR that the union intends to fight any terminations for a policy, which they deem unnecessarily intrusive and may not even be effective.

“The flu shot isn’t a be all end all it only has a certain efficacy,” Strand said.

“Recent studies show that flu vaccination reduces the risk of flu illness by between 40% and 60% among the overall population during seasons when most circulating flu viruses are well-matched to the flu vaccine,” CDC’s website read.

Prabhu maintains that the mandatory requirement is to keep patients safe during flu season.

“People may debate on how effective that is but based on what the level of evidence is and what our peers are doing, we thought this was the best way to protect our patients,” he told KBJR.

In a statement earlier this month, the doctor explained the benefits of receiving the vaccination and has encouraged the public to receive the shot.

“Getting a flu shot is not only the most effective way to prevent getting a serious case of influenza, but it also protects members of our community, especially the most vulnerable – elderly, young children, and those with significant health conditions that may not respond as well to the flu vaccine,” Prabhu said in the statement.

“The vaccine will protect you against what’s believe to be the three or four most common influenza strains currently circulating,” he added.