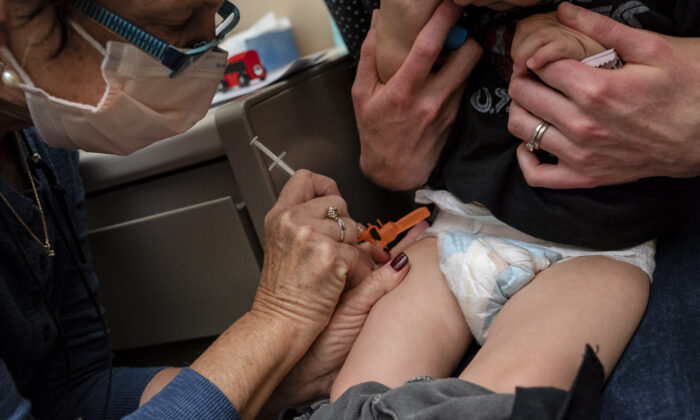 About 4 in 10 Parents Will ‘Definitely Not’ Get COVID-19 Jabs for Their Children: Survey

Most American families are reluctant to get a COVID-19 shot for their young children, a new survey published by the Kaiser Family Foundation (KFF) on Tuesday indicates.

The survey’s results come more than a month after the Centers for Disease Control and Prevention (CDC) on June 18 recommended the jab for children as young as 6 months of age.

According to the KFF data, 43 percent of parents with children ages 6 months to 4 years old in the United States say they will “definitely not” get their child vaccinated against the CCP (Chinese Communist Party) virus, which causes the disease COVID-19.

When asked about their reluctance to vaccinate their children, the primary reasons cited by parents are concerns over potential serious long-term side effects and the “newness” of the jab, as well as limited testing or research being done and concerns over the “overall safety of the vaccines.” Other parents said they believe the shot is not effective, or they are simply not worried about the CCP virus.

The data also revealed that as of July 22, just 7 percent of American parents have already vaccinated their children in this age group, while 10 percent are planning to get them jabbed “right away,” and 13 percent said they will vaccinate their child only if required to do so for school or childcare.

In the latest survey, parents also described in their own words why they would prefer to not get the COVID-19 vaccine for their young children.

“We haven’t followed ‘guidelines’ for safety and are just fine, have no case of COVID and continue our daily lives and have not ever been affected,” an Iowa mother said, adding that the vaccine likely won’t prevent her child from getting the CCP virus.

A mother in South Carolina said she doesn’t see any “upside” in having her child vaccinated, further noting that she believes the shot is “not effective and potentially harmful.”

In addition, more than 50 percent of parents of children in this age group see the shot “as a bigger risk to their child’s health than getting infected” with the CCP virus, compared to 44 percent who say “getting infected is the bigger risk.”

The authors of the report suggested that previous mild cases of the CCP virus among young children likely contributed to parents’ sense that the virus is not a major risk for them.

The response of parents also varied significantly when broken down by vaccination status. The survey found that 64 percent of unvaccinated parents will “definitely not” get the jab for their youngest children, compared with 27 percent of vaccinated parents.

The survey was conducted online and by telephone from July 7 to July 17 among a nationally representative sample of 1,847 American adults—of which 416 people had a child between the ages of 6 months to 4 years old.