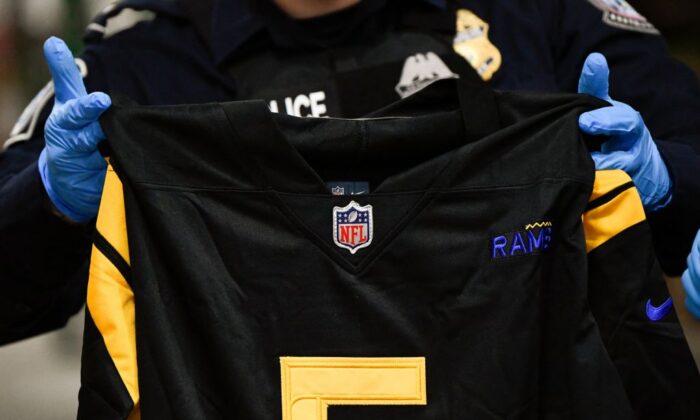 A person holds a fake NFL jersey as officers with US Customs and Border Protection (CBP) demonstrate the inspection of a shipment for illegal and counterfeit NFL items during a press conference ahead of the Super Bowl at the Air Freight Federal Inspection Facility near Los Angeles International Airport (LAX) in Los Angeles, Calif., on Feb. 4, 2022. (Patrick T. FALLON/AFP)
Southern California

LOS ANGELES—Law enforcement agencies have seized $100 million worth of fake Super Bowl tickets and National Football League (NFL) gear over the past year, the NFL and the National Intellectual Property Rights Coordination Center announced at a Feb. 10 press conference, raising public awareness about the danger of counterfeit goods and how to identify them.

“The illegal manufacture and sale of these counterfeit goods represent predatory trade practices that endanger the public health and economy and restrict competitiveness of the United States products in the global market,” said Steve Francis, executive associate director of Homeland Security Investigations, the principal investigative arm of the U.S. Department of Homeland Security.

Three days before the Super Bowl, homeland security officials announced that over 267,000 fake items—with retail prices adding up to almost $97.8 million—have been confiscated in the past year by homeland security agents in collaboration with the U.S. Customs and Border Protection and the Los Angeles Sheriff’s Department.

Officials and the NFL have been ramping up security measures to combat the problem.

“Protecting NFL fans around the country in the globe continues to be a top priority not only during this week’s Super Bowl events but year-round,” said Bonnie Jarrett, NFL’s intellectual property counsel.

In the past year, Jarrett said the NFL has been working against such fraud cases on the internet, resulting in the removal of hundreds of thousands of counterfeit product listings, advertisement sites, and sellers.

To reduce ticketing fraud and to improve the ticketing experience, Super Bowl LVI tickets will all be digital. Paper tickets will not be sold, according to NFL Senior Counsel of Legal Affairs Michael Buchwald.

“We encourage all ticket holders to download the NFL ticket holder app to access their tickets, and then to add their tickets to their Apple Wallet or to the Google Pay app for quick and easy access on game day,” Buchwald said.

Authentic NFL tickets are available on several websites that are a part of NFL’s ticketing network, which includes Ticketmaster, NFL Ticket Exchange, StubHub, and SeatGeek.

Super Bowl jerseys and hats are among the most popular counterfeit goods. Counterfeit goods often lack a proper brand identification and are made of poor-quality stitching.

“If a product that you’re trying to buy doesn’t have the NFL hologram is a fake, same thing with the [product barcode] symbol,” Mayoral said.

Mayoral also said that there has been a proliferation of fake websites selling goods linked to the game. These web scammers often use legitimate product pictures and set the price close to the actual price to mislead customers.