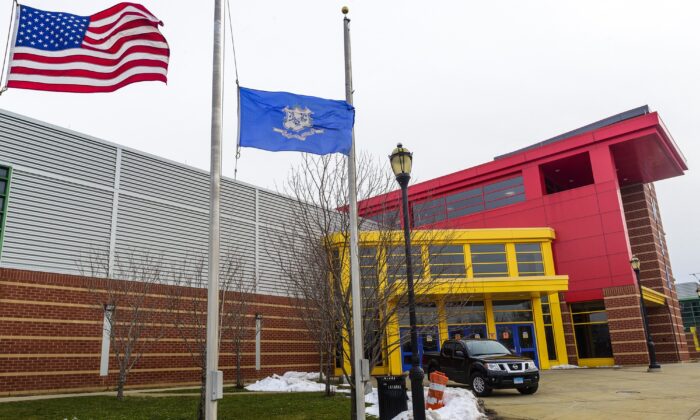 The Sport and Medical Sciences Academy in Hartford, Conn., in a file photo. (Mark Mirko/Hartford Courant/TNS)
Crime and Incidents

About 100 Bags of Fentanyl Found in Bedroom of Connecticut Student Who Died After Overdosing at School, Police Say

HARTFORD, Conn.—About 100 bags of fentanyl were allegedly found in the bedroom of a Hartford child who died this month after overdosing on the drug at school, police said this week.

In a release Tuesday evening, police said that a search warrant was executed at the juvenile’s residence, revealing “approximately 100 additional bags of fentanyl,” which were “packaged in the same manner as the bags located at the (Sport and Medical Sciences Academy school), had the same identifying stamp and tested at an even higher purity level” of 60 percent.

Police said they had found nearly 40 bags of fentanyl stashed in multiple locations within the school in a search prompted after the student overdosed.

“We can confidently say that the fentanyl that caused the overdose was the same fentanyl that was located in the juvenile’s bedroom,” police said in the release. “At this time, we have found no evidence that anyone other than the deceased juvenile brought the fentanyl to school.”

Police said the investigation into how the juvenile came into possession of the fentanyl remains ongoing. The teen has not been identified because of his age.

“We will be taking custody of the fentanyl from the DEA to complete additional testing, which will include fingerprints and DNA testing, in an attempt to identify the person who the deceased juvenile procured these bags from,” Boisvert said in the release.

Boisvert said police have identified a “person of interest” in the case but “cannot label him a suspect at this point.” The person was not named by police.

Boisvert said the juvenile’s “mother has been interviewed and has been fully cooperative with this investigation,” noting that investigators “have no evidence to support her having any prior knowledge of her son’s possession of the fentanyl.”

The fentanyl from the school and the fentanyl recovered from the juvenile’s bedroom were collected by the DEA, Boisvert said. “This was done so that the DEA lab could expedite the testing process. The fentanyl that was tested by the DEA, which was previously disclosed as having the extremely high purity level (58 percent pure), was a sample tested from the approximately 40 bags located at the school.”

Boisvert said the investigation remains active and ongoing. Anyone with any information regarding the case is asked to call the HPD Tip Line at (860) 722-TIPS (8477).