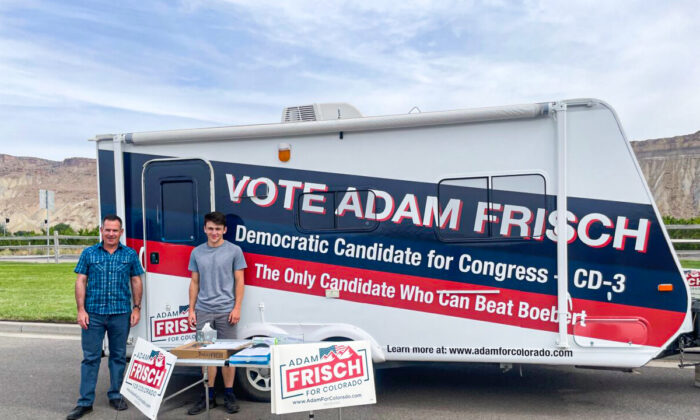 Adam Frisch (L), a Democratic candidate for Congress, and his 16-year-old son, Felix, make a stop on an 1,800-mile trek to visit 56 communities across Colorado in the last week before the June 28, 2022 primary. (Courtesy of Adam Frisch)
2022 Midterm Elections

The Colorado Secretary of State website showed him ahead by only about 1,000 votes. But mathematically talented friends crunched numbers, and confidently predicted him the irrefutable winner of the Democrat primary for the state’s 3rd Congressional District.

On Nov. 8, he’ll be the Democrat squaring off against incumbent, first-termer, Rep. Lauren Boebert (R-Colo.), who defeated her challenger in the June 28 primary. The two also will come up against an Independent, and a Republican write-in candidate.

Until then, the former Aspen city councilman will resume his serpentine path across mountains and valleys of the district’s 49,000 square miles, about half of the state. Once again, the homebuilder and substitute teacher will tow his family’s 19-foot camper-turned-mobile office to communities throughout the district.

As Frisch planned the next stops on his Beat Boebert Buggy Tour on June 28, political analysts sharpened their pencils.

Colorado voters had handed them much to ponder.

In question is what Coloradans most-recent voting behavior might signal about voting nationally throughout the rest of the midterm election cycle.

Playing into analysts’ calculations will be ongoing reactions to the previous week’s Supreme Court ruling overturning Roe v. Wade, which sends decisions on abortion restrictions back to states.

During the campaign, Frisch has said he believes abortions should be “safe, legal, and rare.” His top opponent in the primary, Pueblo single mom Sol Sandoval, promised to work to codify access to abortions in federal law. But that wasn’t enough to push her ahead on Election Day.

Puzzling pundits on June 29 was Colorado’s voting turnout after a week that inflamed passions in both major parties. In a state where voting couldn’t be easier, turnout barely topped 28 percent.

All primary voters in the state are mailed a ballot for the party of their preference. Unaffiliated voters who don’t request a Democratic or Republican ballot receive one of each in the mail. They’re allowed to mail back just one.

In Colorado, the most difficult part of voting is the trek to the mailbox.

Still, substantially fewer voted than in 2018. And participation was dramatically down from the 2020 election.

With slightly more than seven hours before the polls closed on June 28, far fewer Democratic ballots had been turned in than were turned in at the same point in the 2018 midterm primary, a state report showed (PDF).

There was an even larger drop-off from the number of Democratic ballots turned in during the 2020 midterm primaries.

Historically, it’s not unusual for voters preferring Democrats to vote in fewer numbers in midterm elections.

But this time, the number of Republican ballots surpassed Democratic ballots turned in. That’s a departure from normal voting patterns in the state.

It’s unclear if that means Coloradans participated in the “crossover” trend. Or if the preference for Republican ballots follows the general shift nationwide in voter registrations toward the Republican party.

In Colorado, 29 percent of the 3.73 million voters are registered Democrats, and 26 percent are registered Republicans. Wielding the most power to sway elections are the state’s “unaffiliated” voters, the largest voting bloc at 46 percent.

Some of those may have attempted a “crossover” coup by voting Republican and against Boebert in her primary.

Analysts have been tracking an apparent trend in which voters “cross over” and strategically cast ballots in the primary of the party that’s not their preference.

The strategy aims to knock out a candidate they feel may be the toughest to beat in the fall general election.

It’s likely many unaffiliated Colorado voters with strong feelings against Boebert voted on the Republican ballot in an effort to boost her challenger, state Senator Don Coram. Boebert, a MAGA-crowd favorite endorsed by former president Donald Trump emerged triumphant with more than 65 percent of the vote.

But some expected the margin of victory for the gun-toting congresswoman to be wider.

It’s too early to know how the Supreme Court’s ruling overturning Roe v. Wade will affect remaining primaries and the general election in this voting cycle, pundits across the nation opined early this week.

But if the predicted Red Wave fails to appear, it will be a “historic” turnaround, said Susan MacManus, professor emerita at the University of South Florida.

Not affiliated with any political party, MacManus has written many books on politics and is one of the most-quoted political scientists in the South.

Normally, voter turnout lags during the midterm election cycle for the party that holds the White House. And with President Joe Biden’s low approval ratings and a sliding economy, analysts confidently have predicted a so-called “Red Wave” of Republican winners in November.

That’s when political chaos ensued, as soon as the court announced the abortion ruling. Tempers flared. Protestors on both sides of the issue marched, waved signs and rushed to raise political donations. Meanwhile, candidates fumbled for responses that would resonate with voters.

For the first time this election cycle, it seemed possible the Red Wave might lose its momentum and dissipate before hitting the Democrat-held beachhead in Congress.

“The biggest question mark of all is: is this the single issue on which a majority of the electorate will be drawn to vote and to choose a candidate?” MacManus said.

“Because if the economy is still as bad [in November] as they’re predicting, this will be the test case of whether a sort of cultural issue can override an economic issue.

“If the economy’s still bad, and all of a sudden abortion turns out to be the major voting cue for a bunch of people that maybe, in the past, wouldn’t have voted in a midterm, that would make history.”

It’s probably too soon to predict, MacManus and other political analysts said.

It’s best to give voters a little time to settle down after a big event that supercharges political emotions, before officially adjusting predictions, they said.

But when asked a few days after the ruling last week, 56 percent of registered voters said they opposed the Supreme Court’s decision to hand legislation on abortion back to the states, according to a poll by the Marist Institute for Public Opinion.

Forty percent agreed with the decision, and four percent said they were unsure.

The respondents’ feelings about future voting was the most telling for prognosticators.

Some would argue the poll’s language encourages responses that lean left, possibly enough to nudge answers.

Either way, “with the midterm elections less than five months away, the decision by SCOTUS has sent shockwaves through the electorate,” wrote Lee M. Miringoff, the institute’s director.

“Men are +12 points and women are +18 points more likely to support congressional candidates who pledge to codify the protections of Roe v. Wade. Digging deeper, 63 percent of women, including 74 percent of suburban women, are also concerned that the court’s decision is a harbinger of things to come.”

Will the reaction to the abortion issue be enough to change the outcomes of a midterm election that, historically, should have been easy to predict?

There are “two things that go on in a midterm that have been time eternal,” she said. “One is that a first-term president’s party loses a bunch of seats in the midterm, and there’s only been three times in history, I think, where that’s not been proven true.

“But we haven’t really had a good look at what happens when you have you’re in the middle of an economic downturn or recession. Normally, the thesis is that the economy overrides every other issue when people are having financial difficulties in their lives. That’s what they tend to use as their major voting cue.

“So if, for example, we’re in a recession in November, or prior to it when people start voting early, and it turns out that the abortion issue generates a lot of democratic victories, then that would be another very unusual historical result of an election.