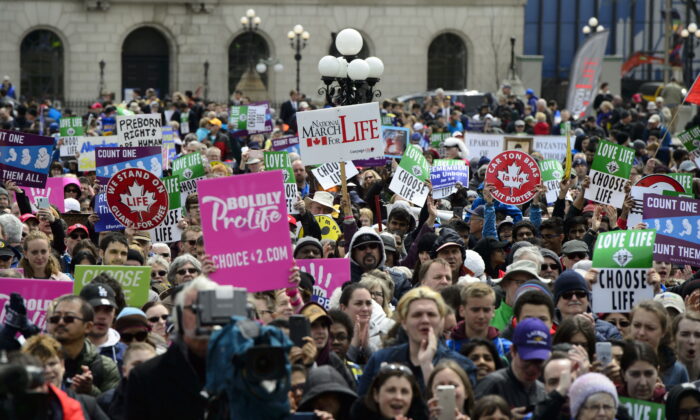 People take part in the March For Life rally on Parliament Hill in Ottawa on May 9, 2019. (THE CANADIAN PRESS/Sean Kilpatrick)
Viewpoints 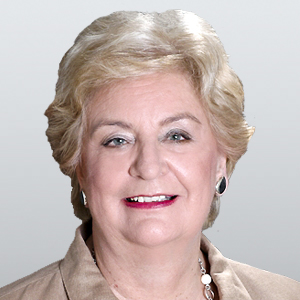 A courageous woman from Nova Scotia, Connie Brauer, tried to change the scandalous abortion situation in Canada by suing the federal government in the Federal Court in 2019. Brauer, a “self-represented party”—meaning she had no lawyer—sought, among other remedies, an immediate injunction banning all abortions in Canada and an immediate end to the public funding of abortions.

The case was dismissed by the Federal Court of Appeal in early October, but not on its merits. Rather, it was due to Brauer’s failure to follow court rules with respect to the facts around her allegations and with respect to her “standing,” meaning she failed to establish that the abortion law had caused her injury and loss—therefore, she had no personal substantial legal interest in the case.

Although her case was dismissed, Brauer was and remains entirely correct that abortion represents nothing less than “mass genocide” perpetrated against the unborn and that the government punishes dissent against abortion by imposing restrictions on anti-abortion protests and by denying federal youth summer job grants to organizations because they oppose abortion.

Brauer v. Canada reinforces a number of important lessons that the pro-life movement needs to bear in mind as it moves forward.

First, the Brauer case is a timely reminder that abortion remains unregulated in Canada, despite the fact that such regulation is entirely within the competence of the legislature. The Supreme Court of Canada’s decision in R. v. Morgentaler (1988) did not say abortion could not be regulated. It held, rather, that the regulation of abortion under the Criminal Code violated the charter because it failed to provide equal access to abortion. The court did not state that the charter provided a woman with an absolute right to abortion.

Second, Brauer reminds us of the importance of the rule of law and that the issue is not merely a matter of “obeying the law.”  The rule of law has a number of facets, one of which is the importance of court procedures. These procedures help to ensure that the court bases its decision on facts that have been proved through cross-examination and not on judges’ whims and personal preferences. Supreme Court Justice McIntyre, in his dissent in Morgentaler, was quite right when he warned of the dangers of relying on unproven materials as his colleagues had done in that case. He stated that the court should “place principal reliance upon the evidence given under oath in court.”

The third lesson is reinforcement of the fact that abortion is primarily a political issue, not a legal issue. It’s undeniable that there are legal issues and consequences associated with abortion. However, it should not be forgotten that the decisions regarding whether to permit abortion and under what conditions are primarily political and social questions. Indeed, it is the defining moral question of our age, much like abolishment of the slave trade was the defining moral question of the 1700s.

Today, we are in the midst of an epic battle between the Culture of Death and the Culture of Life. And the primary battlefields are the hearts and minds of our fellow citizens, including our politicians!

The battle for the hearts and minds of Canadians will not be easy. The particulars of how abortions are carried out, the physiology of an unborn child, who profits from fetal tissue harvesting and the abortion industry, the harm done to women who have had abortions and experienced sex-selection abortion practices—these are not the stuff of light banter but involve serious and heartbreaking discussions. This is one reason why a great many people prefer not to talk about it—precisely because they instinctively know that what is at stake is a human life.

There is no escaping the fact that the abortion question resonates with other vital questions such as the meaning and value of human life, human sexuality, and when human life begins and ends. These are questions that human beings can only answer through thought, reflection, and personal experience. As such, there are as many answers as there are human beings.

Nevertheless, our shared humanity makes possible a consensus: Stripped of political hyperbole and grandstanding, it is not difficult to understand and appreciate that human life is unique and precious and begins at the moment of conception and ends with natural death. This awareness comes from the heart and stillness of the conscience.

There are those who will celebrate Brauer’s defeat, but they should be careful. The left and the Culture of Death don’t want abortion to be discussed, let alone debated, preferring instead to treat the matter as “settled.”  However, it looks very much like Brauer’s “loss” is actually a win, because rather than not discussing abortion, once again it is a front-page story, proving that abortion is anything but “settled” in Canada.

Gwendolyn Landolt
Follow
C. Gwendolyn Landolt has had a long legal career, including as a Crown prosecutor and a lawyer for the federal government. She is a founding member and national vice-president and legal counsel of REAL Women of Canada.