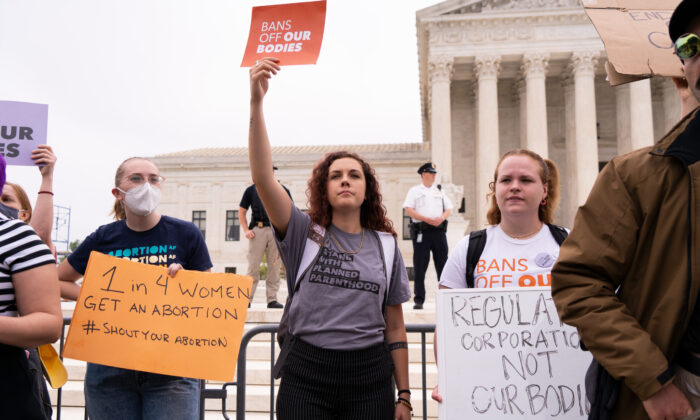 Activists protest in response to the leaked Supreme Court draft decision to overturn Roe v. Wade in front of the U.S. Supreme Court in Washington on May 3, 2022. (Louis Chen/The Epoch Times)
Viewpoints

Abortion in America: Anger in the Streets and Clashes With Police

On May 2, a draft supreme court opinion was leaked to Politico. In this particular draft, Justice Samuel Alito argued that “Roe and Casey must be overruled.”

Before going any further, it’s important to emphasize just how serious the leak was—and still is.

Andrew Esquire, a legal expert, told me that “the leak itself is unlikely to be prosecuted criminally.” But, he stressed, “it represents a fracturing of the court. For the longest time, the Supreme Court held itself up as bi-partisan and professional. This action brings activism and chaos to the doorstep of SCOTUS.”

The legal scholar Jonathan Turley called it “nothing short of breathtaking” and “one of the greatest breaches of security in the history of the Court.” What motivated the leak? asked Turley. “The only intent of such a leak is to trigger a response from outside of the Court,” he concluded.

To put it mildly, a response was most definitely triggered. Angry protesters, mostly female, took to the streets. According to The Guardian, “furious women” rushed to the steps of U.S. Congress. Some even lit candles. Considering women vote in higher numbers than men, it seems entirely possible that the leak was designed to galvanize the troops. If this was the plan, then it appears to be working.

Emotions and the common cold have one thing in common: they’re both incredibly contagious. Of all the emotions, anger is one of the more contagious. In Los Angeles, feelings of anger resulted in pro-abortion protestors clashing with police officers. According to LAPD Chief Michel Moore, when officers tried to communicate with the crowd, some protestors responded by throwing bottles and rocks. At least one officer was injured.

Anger motivates people to do horrible things, especially when they find themselves in the company of other angry individuals. Individual anger quickly becomes mob anger, and mob anger, as any police officer will tell you, is the stuff of nightmares.

However, anger also motivates citizens to vote, according to a University of Michigan study. The Democrats “will try to use their base’s new nightmare scenario—a repeal of federal abortion rights—to salvage midterm elections,” Axios reported. The Democrats, we’re told, hope “young voters, suburban women and voters of color” can “overcome their apathy in a non-presidential election year and turn out this fall with the kind of force needed to make a difference.”

The leak appears to be part of a coordinated effort to energize a specific group of people.

On MSNBC’s “The Rachel Maddow Show,” Sen. Amy Klobuchar (D-Minn.) said “women” and “people who believe in choice are going to have to vote like they never voted before, because that’s the only way we can change this up, or we’re going to have a patchwork of laws across the country.”

In colleges and universities across the land, 60 percent of the students are female. When discussing what second-class citizenship actually looks like, it’s best to examine countries like Afghanistan and South Sudan, where women find it almost impossible to get an education. In several major U.S. cities, women now earn more than men. To argue that women are second-class citizens or on the verge of becoming second-class citizens is not just misleading, it’s thoroughly disingenuous.

President Joe Biden, not surprisingly, also weighed in on the leak, calling the draft opinion “radical.” Should the court overturn Roe v. Wade, both he and his administration are prepared to respond.

As NBC first reported, Biden fears other rights may be jeopardized, “including the right to use contraception and same-sex marriage.”

However, as Fox News was quick to point out, although Biden believes that “a woman’s right to choose is fundamental,” some 40 years ago, he “sang a different tune.”

It’s important to remember that in 1982, Biden, a U.S. senator at the time, wanted to reverse Roe v. Wade. Now, though, as the leading figure on the left, Biden knows that his stance on abortion must align with the party’s philosophy. Whether or not the president actually believes in “a woman’s right to choose” is not really the point; today, politically speaking, Biden is pro-abortion.

According to a recent Washington Post-ABC News poll, “54 percent of Americans think the 1973 Roe decision should be upheld” while “28 percent believe it should be overturned—a roughly 2-to-1 margin.”

A survey carried out by the Pew Research Center last year “found 56% of U.S. Catholics believe abortion should be legal in all or most cases. Additionally, 68% said Roe should not be overturned.”

How did we get to a point where even Catholics (like Biden) support abortion?

In the United States (and beyond), according to a study by the World Health Organization, after a downturn during the mid-2000s, abortion rates are fast returning to early 1990s levels.

Sadly, in the United States (and beyond), getting an abortion has become an afterthought of sorts. Amazon recently announced that it will offer up to $4,000 in travel expenses annually for various non-life threatening medical procedures, including abortions. Authors over at Vice are giving tips on making your own DIY abortion pills (54 percent of abortions are now done with pills). Women have been throwing “abortion parties” for years, complete with snacks, alcohol, and lots of dancing.

My point here is not to question the mindsets of such women; it’s to shed light on the many ways in which abortions have become the norm.

If Roe v. Wade ends up being overturned, expect the parties to become less frequent in nature.