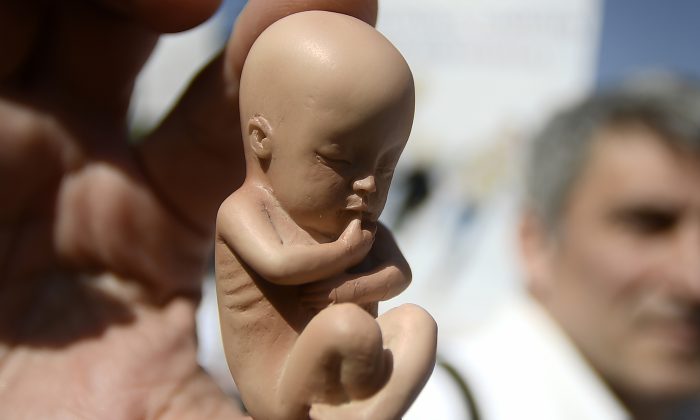 South Korea cracked down on human flesh capsules, made with the remnants of deceased human fetuses, back in 2012, but black markets were detected again in recent years. (Filippo Monteforte/AFP/Getty Images)
Viewpoints

The abortion debate has risen and fallen in waves in the United States’ cultural and political psyche. Even as we observe what it does to society, the family, and the legal system, it seems both sides will never meet.

As Planned Parenthood performs 300,000 abortions per year, multiple states have tried to enact “heartbeat bills” to mitigate accessibility to abortion, deemed a woman’s right via Roe v. Wade, some 50-odd years ago. This is the state of abortion today, a contentious debate on a continuous loop.

One side holds a Supreme Court ruling, the other, an ultrasound photo. “It’s too important to give up,” both claim. Can they both be right? Can this ever be resolved?

In her brilliant essay, “The Things We Can’t Face,” in the December issue of The Atlantic, Caitlin Flanagan attempts to add nuance to a debate that’s often black or white, good or evil.

Flanagan, a woman I admire and an essayist of unparalleled proportion, just—well—she just went there. Rather than take a deep dive into policy, abortion clinics, or law, Flanagan just showed readers how abortion feels for the three people involved: mom, dad, and baby.

Abortion can endanger women and it always endangers the baby. Whether the abortion is successful or not, the father walks away a little emptier, although with more freedom, and sometimes gut-wrenching heartache to boot.

The essay is accurate and compelling. “The argument for abortion requires many words, the argument against it doesn’t even take a single word,” Flanagan writes when describing the wonders of a 12-week-old tiny human on a 3D/4D ultrasound.

This is what pro-life advocates often hold up as the singularly most-compelling argument not for or against abortion, really, but for the personhood, the sheer humanity of a baby growing in utero, yet to fully breathe oxygen but thriving nonetheless in his mother’s womb—and the thing abortion advocates refuse to acknowledge for precisely those reasons.

It’s here that the essay’s thesis is persuasive yet ironic. Flanagan presents, in a very Atlantic sort of way, that even though abortion is always an “unwinnable argument,” we need to “face the best arguments from the other side.”

But this premise—that both sides have refused to acknowledge the abortion debate genuinely, and with equal parts intellect and empathy—is somewhat false, at least to me. Pro-life advocates (often, political conservatives, but not always) have been fielding these questions, and presenting compelling answers, for decades.

For example, Flanagan asks what will become of women and their safety, should abortion be banned and continue in a dark alley somewhere? Many Democrat legislators oppose “heartbeat bills” with the same rhetoric. Abortion, illegal or not, is safer now than it ever has been. Heck, California Gov. Gavin Newsom proposed a bill that would help college students get one between classes. It’s an old argument, and it used to be valid, but it is no longer.

The other more compelling argument is that pro-life advocates have refused to acknowledge women; they only have enough empathy for the unborn baby. Women are the ones “left behind,” and are often fearful, vulnerable, unmarried or married, wise or unwise, careful or careless—what of her if she continues the pregnancy?

In the decade following Roe, this argument might have held up. But now, there are more clinics for mothers offering health care, ultrasounds, and supplies for babies—including anything from wipes to adoption information—than ever before. They are increasing as Planned Parenthood clinics are being shut down. In fact, they were so useful in California, the state enacted a law that forced pro-life clinics to advertise for abortion. (This was so unconstitutional, the clinics sued California all the way the Supreme Court and won.) This argument, too, turned out to be a straw man, at least in the last few decades.

That leaves us with one final piece of the abortion debate: Is an unborn fetus a tiny human? If so, does the human have its own legal rights—who decides those? If the Supreme Court can be wrong about Plessy v. Ferguson, could they be wrong about Roe v. Wade? If Roe is wrong, are there still two compelling sides to this argument?

The problem is not that both sides of the abortion debate aren’t presented with verve and veracity, it’s that only one continues to ignore the facts.