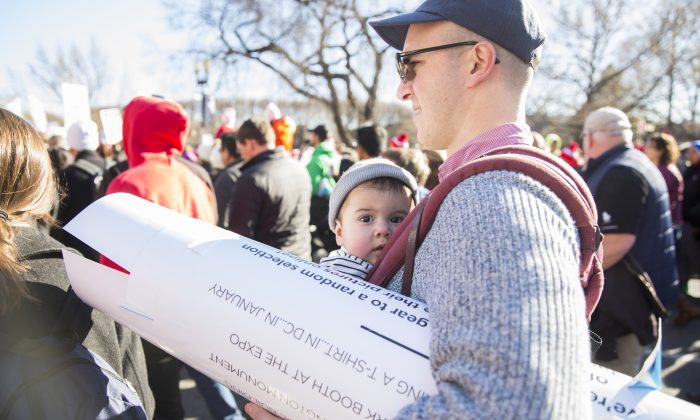 Aborted Babies Have Fathers and Mothers

Northam makes no mention of the father being party to the discussion of what happens to infants who survive abortions. According to him and others on the pro-abortion side, the decision should be left to the mother and her doctor. We focus on the mother and her unborn child, but every baby has a father, too.

The father contributed the sperm that impregnated the egg to create a new human life. When a pregnancy ends with an abortion, some men grieve and find their lives upended. Fortunately, there are resources for the fathers of aborted babies.

The Men and Abortion Network is an effort to recognize the pain and suffering of men who have been denied fatherhood by choice or by circumstances beyond their control. Its mission is to “promote emotional healing for men who have lost a child to abortion,” as well as to raise awareness in the counseling community about the impact of abortions on some fathers.

There is also a ministry, called SaveOne, that acknowledges “forgotten fathers” who suffer the ill effects of abortion. A wife may have aborted a child without the father’s consent, or the father might have pressured the wife or girlfriend to terminate a pregnancy, only to find themselves afterward wracked with regret. The ill effects of abortion include “anger, bordering on rage, addictions to pornography, sexual problems, and skyrocketing rates of domestic violence,” according to SaveOne.

Fortunately, more and more men are turning to counseling to deal with the trauma associated with the abortion of the baby they wanted or the one they thought they didn’t.

In 2010, I interviewed Greg Hasek and Phil Holsinger, two men active in the pro-life movement, and they helped me understand the effect that abortion has on involved men.

Hasek is a licensed marriage and family therapist who was living in Oregon at the time of our interview. He now lives and practices in Florida. Hasek reported talking with an increasing number of male clients traumatized by their abortion experiences. Many of the men he counseled were addicted to pornography.

According to Hasek: “Men are more likely to connect to the loss of a role rather than the loss of the baby. The loss becomes real for them when they connect the abortion to the loss of fatherhood or the role of being a father. They also seem to have an omnipotent responsibility in the abortion decision, oftentimes more than the woman. They internalize a sense of failure as a provider and protector of not only a future child, but also of their partner. This internalized sense of failure as a man often later contributes to relationship difficulties and at times the eventual loss of that relationship.”

Men express grief differently than women. Their expressions of grief are often mistaken for indifference.

Holsinger, the CEO of Blue Ridge Women’s Center in Roanoke, Virginia, made a similar report. He shared his abortion story: “As a young man growing up in a family conspicuously deficient of exemplary fathering, I was left on my own to determine what it meant to be provider and protector, as well as what it meant to be a man. In the absence of a good role model, I found myself attempting to prove myself a man through risky behavior and sexual conquest. When a pregnancy resulted from my attempts to prove myself a man, it was easy to suggest abortion. From my perspective at the time, being a man had nothing to do with being a father. … One of the greatest impacts of abortion on the men who participate in that decision is how it impacts our ability to fulfill the role as father for our other children.”

Holsinger concludes, “Abortion is a direct assault on fatherhood because it countermands the basic concepts of protection and provision—the very character traits God created men to express.”

More recently, I comforted a male student who missed classes because he was grieving an abortion. His mother, a Planned Parenthood counselor, had persuaded the young Catholic couple to abort the baby. The young man was stunned by his reaction to what he thought would be an easy fix for the problem they confronted. It was not. I sent him to his priest.

We are complicated beings in a complicated society. The solutions will never be easy. At this moment in history, we would do well to broaden our discussion of abortion to include mothers, fathers, and babies within and outside the womb. Should men have any rights? Some babies survive the abortion process. Should the biological father be notified and given an opportunity to rescue the infant that Northam speaks of resuscitating if the mother and doctor agree? These are questions we should ask ourselves as a humane society.

As long as men and women engage in sex, there will always be unexpected pregnancies and societal pressures to take the easy way out—to get an abortion. I salute the couples who work together to avoid a pregnancy that ends in an abortion. For those who terminate pregnancies, we need to make men and women aware of available resources.

Our society would be better off if more grieving mothers and fathers understood and acknowledged the lasting ill effects of an abortion decision.

Carol M. Swain
Follow
Carol M. Swain is a former tenured professor at Vanderbilt and Princeton universities. Her Be The People News blog and podcast empower individuals to think independently, understand their responsibility, and make a difference in the world.
More articles from this author
Netflix’s ‘Cuties’ the Latest Instance of Sacrificing Our Children
sharecomments
Bob Woodson and the Birth of the 1776 Initiative
sharecomments
Richard Jewell as Everyman
sharecomments