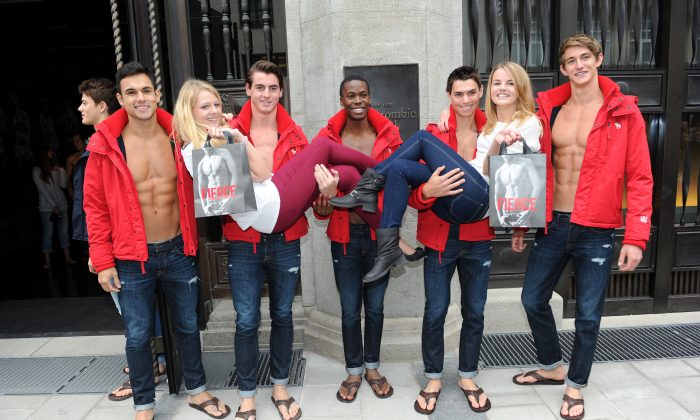 Young women pose for photographs with male models outside the Abercrombie & Fitch flagship clothing store during the opening of Abercrombie & Fitch Munich flagship store on October 25, 2012 in Munich, Germany. The clothing company has been criticized for catering to "cool, good-looking people." (Hannes Magerstaedt/Getty Images)
Business & Economy

Abercrombie & Fitch: Controversy Over Who Business Caters To

“He doesn’t want his core customers to see people who aren’t as hot as them wearing his clothing,” Lewis said. “People who wear his clothing should feel like they’re one of the ‘cool kids.'”

Abercrombie doesn’t have XL or XXL women’s clothing; it does have XL and XXL men’s sizes, but only for football players and wrestlers, said Lewis.

The book Lewis and Jeffries wrote, “The New Rules of Retail: Competing in the World’s Toughest Marketplace,” came out in December 2010.

Jeffries himself told Salon about his views on business when he was 61, in 2006.

He said that the “emotional experience” he creates for customers of Abercrombie is important.

“In every school there are the cool and popular kids, and then there are the not-so-cool kids,” he continued. “Candidly, we go after the cool kids. We go after the attractive all-American kid with a great attitude and a lot of friends. A lot of people don’t belong [in our clothes], and they can’t belong. Are we exclusionary? Absolutely. Those companies that are in trouble are trying to target everybody: young, old, fat, skinny. But then you become totally vanilla. You don’t alienate anybody, but you don’t excite anybody, either.”

Meanwhile, a document came to light last year outlined rules for actors and models that worked on Abercrombie and Fitch’s Gulfstream jet.

Among the rules: Coats could only be worn by the flight crew if the temperature fell to 50 degrees or lower, and flip-flops were mandatory in flight and when meeting passengers. Staff, when asked something by Jeffries or the people with him, were to say “No problem” instead of phrases such as “Sure” or “Just a minute.”