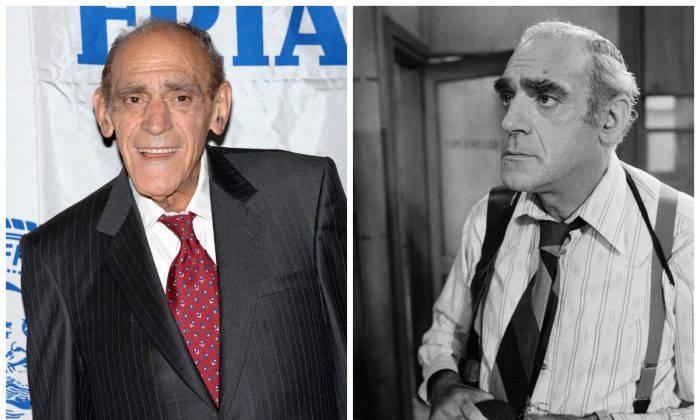 It’s bound to happen now and then. The Academy Awards tradition of honoring the stars who departed in the last year has a lot of ground to cover. Still, one expects the researchers to provide a comprehensive list.

At the 88th Oscars this year, actor Abe Vigoda was most notably left off the list. Vigoda, known especially for his role as Detective Fish in the 1970s TV series “Barney Miller” was also a prolific stage and screen actor, with about 40 movie credits to his name.

His most famous silver screen role was certainly playing Salvatore Tessio in “The Godfather” movies.

His most famous silver screen role was certainly playing Salvatore Tessio in “The Godfather” movies. He was also in “Cannonball Run II” (1984), “Joe Versus the Volcano” (1990), and was a mob boss in Wesley Snipes’s “Sugar Hill” in 1993.

Vigoda died at the advanced age of 94 on Jan. 26, 2015 in New Jersey. In one famous incident in 1982, People Magazine mistakenly pronounced Vigoda dead.

At the time, Vigoda was performing in “The Fifth Season,” at Stage West in Calgary, Canada, which caused him to miss the wrap up party for the “Barney Miller” series. Given the star’s conspicuous absence, a People reporter erroneously noted that the “late” Vigoda was not in attendance.

Comedian Jeffrey Ross, and others, referenced the now famous incident in tweets: “They left Abe Vigoda out of the in memoriam. That’s okay, he dies every year anyway.”

They left Abe Vigoda out of the in memorium. That’s okay, he dies every year anyway. #Oscars

Poor Abe Vigoda. For years people thought he was dead. Now that he actually died, he gets snubbed during the “In Memoriam” segment. #Oscars

It seems that Abe Vigoda is the consensus pick for WHY WAS HE NOT IN THE MEMORIAM this year. #Oscars

You know you’re at a cool Oscar party when two people shout out “What about Abe Vigoda?!?” after the In Memoriam section ends.

Did no one tell the Academy that Abe Vigoda finally died?

A few other names were also missing from the ‘In Memoriam’ role call including Geoffrey Lewis, father of Juliette Lewis whose movie credits include “The Way of the Gun” and “Mind Games;” Gunnar Hanson who played the villain Leatherface in the original “The Texas Chainsaw Massacre;” and French New Wave director Jacques Rivette.