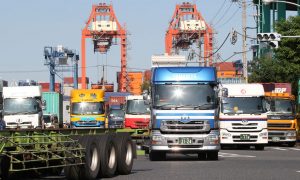 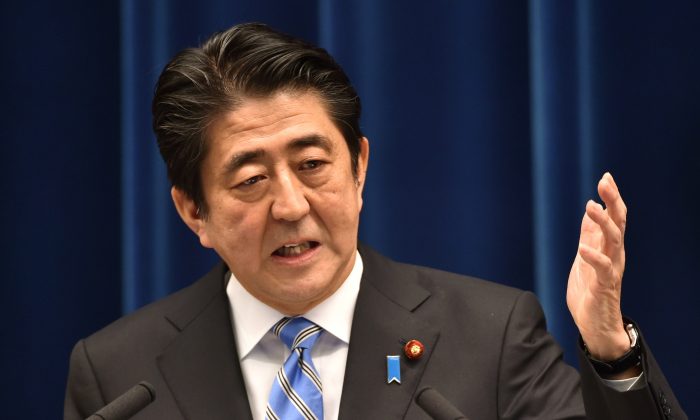 Japan's Prime Minister Shinzo Abe speaks during a press conference at his official residence in Tokyo on Nov. 18, 2014. Abe said November 18 he was delaying an expected sales tax rise and dissolving the lower house of parliament after figures showed Japan was in a recession. (Kazuhiro Nogi/AFP/Getty Images)
Asia & Pacific

It may seem politically counter-intuitive for a prime minister to seek an early election just when the economy has gone into recession. But following his return to Japan from the G20 Leaders’ Summit in Brisbane, Shinzo Abe has done just that.

Although an election is not required until late 2016, Abe has called a snap election for the Lower House of the Diet only halfway through his Liberal Democratic Party (LDP) government’s first term. The Diet will be dissolved on November 21; the election campaign proper will start December 2; the election will be held on December 14.

Since being elected in December 2012, the LDP and its coalition partner, the Komeito Party (KP), have held a comfortable majority of 325 seats in the 480-member lower house.

Japan’s economy slumped 7.3% in the quarter after the consumption tax was raised from 5% to 8% in April. This was an attempt to begin to claw back Japan’s public debt, which is among the developed world’s highest at around 220% of GDP. Growth continued to decline by 1.6% in the July-September quarter. This surprised economists, who were projecting a recovery for the quarter of least 2.1%.

Abe’s cabinet was due to decide whether to proceed with a further increase in the consumption tax to 10% from next October. Abe will now seek a mandate to delay the raise until April 2017.

However, an election is not required for this. The opposition parties generally do not favour the increase, so any required amending legislation for a delay would easily pass the Diet. The consumption tax delay is therefore being used rather artificially as a pretext to call the early election, and thus act as a political circuit-breaker for the LDP before the economy deteriorates further.

The Diet is expected to approve a supplementary budget before it is dissolved. This budget is aimed at providing stimulus spending of more than two billion yen, particularly directed towards rural and regional areas, whose ageing and shrinking populations are already facing stagnation.

Also, the yen weakening to a seven-year low has raised the cost of imports, adding to the burden on consumers. It has also raised the energy costs for businesses. The softer yen has yet to produce a reduction in a record series of trade deficits, although Japan’s stock market recently reached a seven-year peak.

Abe’s cabinet has suffered a recent decline in its approval ratings to its lowest point of 44%. This came in the wake of two ministerial resignations in October due to electoral funding scandals.

Despite this, the main tactical motivation for the timing of Abe’s decision is to take advantage of a weak and divided opposition. The main opposition party, the Democratic Party of Japan (DPJ), remains far behind in recent opinion polls at 7.9%. This compares to 36.6% support for the LDP, which will be hoping voters still regard the DPJ as unfit to return to office. The DPJ presided over a politically inept period of government from 2009 to 2012 under a rotating series of prime ministers.

Japan’s political spectrum is further splintered by a bewildering range of shifting and reforming parties, which endure even lower levels of public support. These include the Japanese Communist Party; the nationalist Japan Innovation Party (JIP), which this year suffered a defection of ultra-conservative members who formed the Party for Future Generations; the populist People’s Life Party (PLP); the neoliberal Your Party (YP), which is facing a potential split; and the progressive Social Democratic Party (SDP). Many independent candidates are also expected to contest the election.

The generally high level of political apathy among the Japanese electorate – around 40% of those polled express no support for any party – and voter turnout in recent elections of around 60% have also usually been an advantage for incumbent LDP governments.

An election victory – even one with a reduced majority – would allow the LDP to continue its plans to pass a controversial range of legislation. This includes restarting nuclear reactors and reinterpreting the constitution to allow participation in “collective self-defence” operations with allied countries, potentially including Australia. This would incorporate a further easing of restrictions on defence exports, which would allow the future sale of submarines to Australia.

Japan is also likely to continue to participate in finalising negotiations on the Trans-Pacific Partnership despite opposition from the farmers’ lobby.

These unpopular issues could prove problematic for the LDP in the campaign – but only if the opposition parties manage to become competent enough to capitalise on them. The DPJ has held talks with the YP, JIP, SDP and PLP to potentially form a coalition against the LDP, but any such alliance is likely to prove too unwieldy and ideologically fractious to pose any serious threat to the LDP-KP coalition.

Abe is therefore likely to prevail, extend the term of his government to 2018 and consolidate his leadership among the various factions of the LDP. He is presenting the election as a referendum on his once-lauded policy of “Abenomics”, centred on a combination of fiscal stimulus, extensive quantitative easing and monetary expansion. Structural reform, however, has so far proved more elusive.

Abe claims to be determined to finally break Japan’s economy out of its decades-long deflationary slump. However, with Japan sinking back into its fourth recession since 2008, the gloss of Abenomics has definitely worn off. That makes this election a risky call.

Craig Mark does not work for, consult to, own shares in or receive funding from any company or organisation that would benefit from this article, and has no relevant affiliations. This article was originally published on The Conversation. Read the original article.