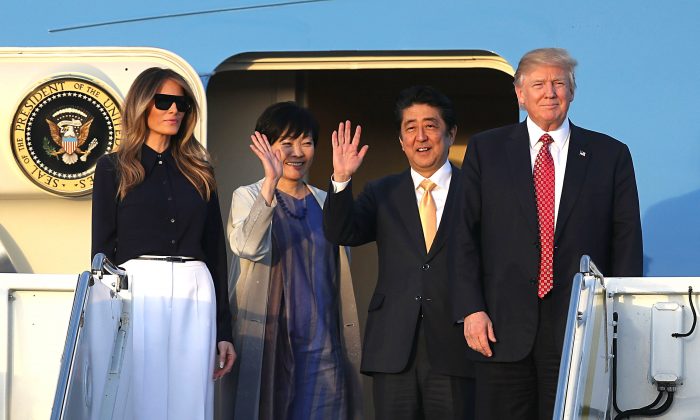 President Donald Trump and his wife, Melania, arrive with Japanese Prime Minister Shinzo Abe and his wife, Akie, on Air Force One at the Palm Beach International airport as they prepare to spend part of the weekend together at Mar-a-Lago resort in West Palm Beach, Florida on Feb. 10, 2017. (Joe Raedle/Getty Images)
Politics

Abe Says He Sought Common Goals, Not Differences With Trump

Abe returned Monday night from the meetings in Washington and a round of golf with Trump at one of his courses in Florida.

“Surprisingly, President Trump is a good listener. He is open to turning his ears to others, and he is friendly and open,” Abe said on NHK public television. “I was able to discuss frankly where Japan is headed to.”

Abe said his main goal was to show the world an unshakable Japan-U.S. alliance. He said the two leaders discussed Russia, China, North Korea and other key issues while they traveled together from Washington to Florida.

Abe, who has been criticized by opposition lawmakers at home for not speaking out against some of Trump’s policies, especially his refugee and immigration measures, said he didn’t discuss them because they were internal U.S. policies.

“Rather than deliberately stressing the differences, I wanted to start with acknowledging our common goals,” Abe said. “When it comes to issues of global concern, my approach is to create an environment where one can listen to the other party.”

Abe said he suggested to Trump that the problems of Syria, Ukraine, and Iran could not be resolved unless the leaders of the United States and Russia meet face to face. Abe has held talks more than a dozen times with Putin, and described the Russian leader as “a man who keeps promises.”

Trump is seen as taking a more peaceful approach toward Moscow than the administration of his predecessor, Barack Obama. But his stance toward North Korea, which dominated their discussions after it launched a banned missile on Sunday, will be tougher, Abe said.

“The Trump administration will pursue a diplomatic resolution, but will put all (military) options on the table in the meantime,” he said.

Abe said he was relieved that Trump did not ask Tokyo to pay more for U.S. troops based in Japan. He said the two leaders agreed to expand Japan’s military role in their alliance amid growing security concerns in the region, including North Korea’s missile and nuclear threat and an increasingly assertive China.

In 2015 Japan enacted a security law designed to expand its military role in bilateral alliances and international peacekeeping.