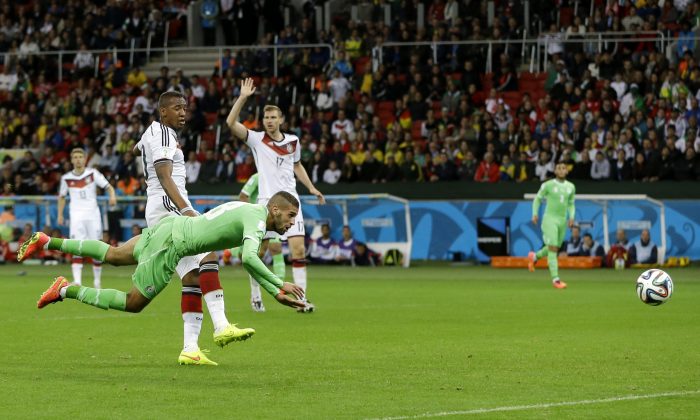 Algeria's Islam Slimani is airborne in front of Germany's Jerome Boateng after heading the ball at Germany's goal during the World Cup round of 16 soccer match between Germany and Algeria at the Estadio Beira-Rio in Porto Alegre, Brazil, Monday, June 30, 2014. (AP Photo/Kirsty Wigglesworth)
Soccer

Abdelmoumene Djabou, a player for Algeria, scored a goal for his team against Germany.

He scored the video at the 32nd minute.

The game is now over.

Four years ago, France crashed out of the group stage, shamed a nation by going on strike and was jeered by its own fans and lambasted by politicians in the fallout from an embarrassing tournament.

“I’m proud of my players because we’re coming back from very far. I think we’ve given a lot of pleasure back to our fans,” France coach Didier Deschamps said. “I think there were 5,000 here and millions back home who will feel proud.”

Nigeria goalkeeper Vincent Enyeama had just made a superb save to tip over Karim Benzema’s header, but he flapped at the ball from the ensuing corner and Pogba pounced in the 79th minute to nod in his first goal of the tournament.

That atoned for a scrappy first half in which he gave the ball away carelessly and placed a volley too close to Enyeama. Scoring such a crucial goal will boost his confidence heading into the last eight game on Friday at Rio’s Maracana stadium against either Germany or Algeria, who were playing their match later.

“I’m very happy and proud to be among the last eight teams left,” France coach Didier Deschamps said. “We have four days left to prepare for another battle.”

Yobo, who announced his international retirement after the game, turned the ball into his own net in stoppage time under pressure from France substitute Antoine Griezmann.

At the final whistle, France’s relieved players danced in front of their fans as dreams of a repeat run to the final — just like in 2006 — moved a step closer.

“We had the whole country behind us. It’s one of the proudest moments of my life,” Pogba said. “We know we’re capable of playing our best match and playing the worst, but today we were good. We stuck together and I’m very happy.”

France started slowly and finished strongly in the second round match.

“I’ve yet to see a team play well over the whole 90 minutes,” Deschamps said. “Nigeria dropped off a bit and that allowed us to get on top.”