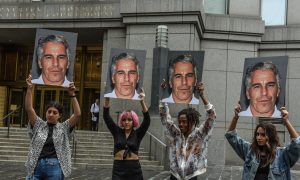 The woman who accessed video showing an ABC anchor talking about the network spiking a story about convicted sex offender Jeffrey Epstein has been identified as a recent CBS producer.

Ashley Bianco, 25, who won multiple Emmy awards, was the woman who accessed the footage. She gave an interview to former NBC and Fox News anchor Megyn Kelly that was published on Nov. 8.

Bianco deleted all of her social media accounts in the 24 hours leading up to the interview.

Bianco accessed the footage while still working at ABC and left the network to join CBS in October. She was a producer for “CBS This Morning” until CBS fired her this week after being alerted by ABC that an investigation showed she was the staffer who accessed the video.

7. The name of the former ABC News employee who was fired by CBS News this week is Ashley Bianco. In the past 24 hours she has deleted her Twitter and LinkedIn accounts.

Bianco was an associate producer at Good Morning America before leaving for CBS This Morning last month pic.twitter.com/r4QuqALooe

The woman was accused of leaking the footage, but told Kelly she did not leak the video.

“I just clipped it off. I essentially left it in the system. It never left the system. We do it all the time,” she said.

She said that a number of employees were watching Amy Robach when the anchor was venting in the studio on a “hot mic” about ABC killing a story about Jeffrey Epstein.

Bianco worked for ABC for three years before leaving in August. She had been working for CBS for four days when she was fired, she said.

The footage showed ABC anchor Amy Robach venting about the network not airing a story she worked on about Epstein, based on an interview and evidence provided by Virginia Roberts, a woman who has accused Epstein of abusing her while she was a minor.

“We would not put it on the air. First of all, I was told, ‘Who’s Jeffrey Epstein? No one knows who that is. This is a stupid story,'” Robach said about the internationally known convicted sex offender.

In a statement after the video was released, Robach changed her tune, saying: “As a journalist, as the Epstein story continued to unfold last summer, I was caught in a private moment of frustration. I was upset that an important interview I had conducted with Virginia Roberts didn’t air because we could not obtain sufficient corroborating evidence to meet ABC’s editorial standards about her allegations.”