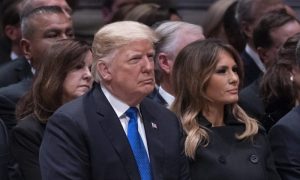 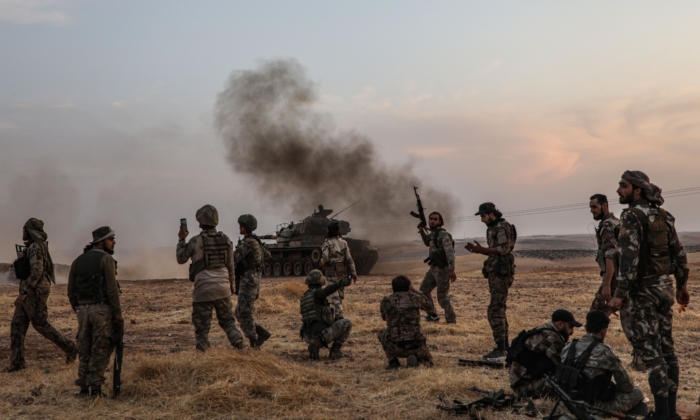 Turkish soldiers and Turkey-backed Syrian fighters gather on the northern outskirts of the Syrian city of Manbij near the Turkish border on Oct. 14, 2019, as Turkey and its allies continue their assault on Kurdish-held border towns in northeastern Syria. Turkey wants to create a roughly 20-mile buffer zone along its border to keep Kurdish forces at bay and also to send back some of the 3.6 million Syrian refugees it hosts. (Zein Al Rifai/AFP via Getty Images)
Politics

ABC News on Oct. 14 put out a correction and took down a video recorded at a Kentucky gun range after falsely claiming it was footage of the armed conflict in Syria.

“We’ve taken down the video that aired on ‘World News Tonight’ Sunday and ‘Good Morning America’ this morning that appeared to be from the Syrian border, immediately after questions were raised about its accuracy. ABC News regrets the error,” ABC News said in an Oct. 14 statement.

“This video right here appearing to show Turkey’s military bombing Kurd civilians in a Syrian border town,” Llamas told viewers. “The Kurds, who fought alongside the U.S. against ISIS. Now, horrific reports of atrocities committed by Turkish-backed fighters on those very allies.”

The video ABC News aired matched footage recorded in 2017 during a nighttime shooting event at Knob Creek Gun Range in Kentucky. According to Knob Creek’s website, the nighttime machine-gun shoot is a biannual event. It’s attended by nearly 20,000 people, according to Guns.com.

The news anchor prefaced the video with comments that linked the “horrific report of atrocities” with a decision by President Donald Trump to withdraw U.S. troops from northern Syria. Trump has defended the decision and said he will issue sanctions against Turkey aimed to restrain the Turks’ assault in Syria.

“Big sanctions on Turkey coming! Do people really think we should go to war with NATO Member Turkey? Never ending wars will end!” Trump wrote on Twitter on Oct. 14. “The same people who got us into the Middle East mess are the people who most want to stay there!”

ABC News played the footage again on Good Morning America on Oct. 14, in a segment titled “Crisis in Syria.”

“This video obtained by ABC News appears to show the fury of the Turkish attack on the border town,” correspondent Ian Pannell said in reference to the gun range footage.