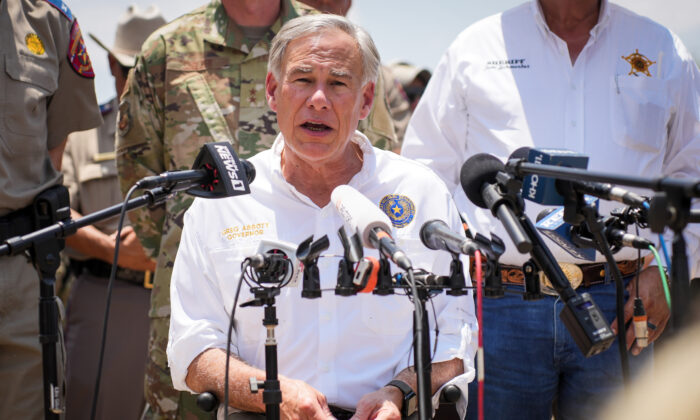 Texas Gov. Greg Abbott took an unprecedented step on July 7 toward mitigating the border crisis, issuing an executive order that directs state law enforcement officers to apprehend illegal immigrants and return them to a port of entry at an international bridge.

“I … do hereby authorize and empower the Texas National Guard and the Texas Department of Public Safety to respond to this illegal immigration by apprehending immigrants who cross the border between ports of entry or commit other violations of federal law, and to return those illegal immigrants to the border at a port of entry,” Abbott’s executive order states.

The order comes two days after five Texas counties declared the crisis an “invasion” and urged Abbott to respond at the state level, using his constitutional powers.

Abbott states that the Biden administration “has abandoned the covenant, in Article IV, Section 4 of the U.S. Constitution, that ‘[t]he United States . . . shall protect each [State in this Union] against Invasion.'”

In response, the governor can call on state military forces under Article IV, Section 7 of the Texas Constitution, as well as relevant sections of the Texas Government Code.

“President [Joe] Biden’s failure to protect our border has necessitated action by the State of Texas to ensure public safety and to defend against violations of its sovereignty and territorial integrity,” Abbott stated in the order.

“The cartels have become emboldened and enriched by President Biden’s open border policies, smuggling in record numbers of people, weapons, and deadly drugs like fentanyl,” he said in an accompanying statement.

Along the whole southwest border during the same timeframe, agents have detected, but not captured, at least 850,000 illegal immigrants, known as “gotaways.”

“President Biden has refused to enforce the immigration laws enacted by Congress, including statutes mandating detention of certain immigrants who have claimed asylum or committed a crime,” Abbott stated in his executive order.

“President Biden’s reckless refusal to secure the border will provide material support to the cartels, allow them to smuggle more dangerous people, drugs, and weapons into Texas, and embolden cartel gunmen to continue shooting at state and federal officials.”

Last week, Kinney County Sheriff Brad Coe drove four illegal aliens to the international bridge in Eagle Pass, Texas, and released them back to Mexico after Border Patrol was unable to take them into custody.

Kinney County was one of the five counties to declare an invasion on July 5, along with Goliad, Terrell, Edwards, and Jeff Davis. Presidio County signed a similar declaration on July 7.

Kinney County Attorney Brent Smith said, prior to Abbott’s announcement, that he expected up to 25 Texas counties to declare an invasion by the end of July.

“The directives of this order simply result in illegal aliens being detained in Texas and being released in Texas,” Smith said of Abbott’s move.

“Without declaring an invasion and invoking the self defense clause under Article 1, the lawlessness and violence occurring on our border with Mexico will continue.”

National Border Patrol Council President Brandon Judd said in a previous interview that Abbott should “absolutely” invoke his powers under the Constitution to call the border crisis an “invasion” and respond accordingly.

“We’re at a breaking point. We’ve got miles upon miles of border that just aren’t patrolled because we have to deal with, frankly, an invasion,” Judd told The Epoch Times on April 15.

“When you’re dealing with over 200,000 illegal border crossings per month, I don’t know how you don’t call it anything but that.”

Customs and Border Protection didn’t respond by press time to a request for comment from The Epoch Times, or if the agency plans to support the return of illegal aliens at the international bridges.

A legal opinion published by Arizona Attorney General Mark Brnovich on Feb. 7 addresses the “invasion” question. The opinion centers around the definitions of “actually invaded” and “invasion” and whether the federal government has been derelict in its duty to protect.

“The on-the-ground violence and lawlessness at Arizona’s border caused by cartels and gangs is extensive, well-documented, and persistent. It can satisfy the definition of ‘actually invaded’ and ‘invasion’ under the U.S. Constitution,” the opinion reads.

Abbott’s office didn’t respond by press time to a question from The Epoch Times asking if he expects the executive order to be met with legal challenges from the federal government.

CORRECTION: The original version of this article stated that illegal immigrants would be returned to Mexico, instead they will be returned to the ports of entry on the U.S. side of the border. The Epoch Times regrets the error.