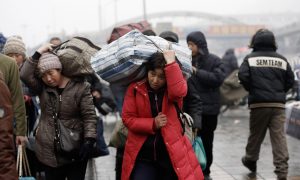 Earlier this month, China received a blunt wake-up call when four rural children, aged 5 to 14, ended their lives by drinking pesticide. They had been abandoned by their parents who separated and left their peasant life in southern China to find work in the city.

The tragedy highlights the hardships and political discrimination that millions of migrant workers and their dependents face in modern China.

Last year, the four children’s mother headed for the factories of Guangdong Province following domestic violence; this March, they were cut off completely when their father also left the village of Bijie, located in the province of Guizhou.

Police investigators told China News Service that they had found a suicide note left by the oldest of the children—a brother with three sisters—containing his farewells to his parents and life.

“I know you mean well for us, but we should go now,” the note read. “I dream about death, and yet that dream never comes true. Today it must finally come true.”

The Children China Left Behind

The children from Guizhou, one of China’s impoverished provinces, were just a drop among China’s ocean of “left-behind” children, who all in all number 61 million. It is  wholly one-fifth of the entire Chinese population under 14 years of age, according to a report by a Chinese NGO called the Caring Center for Children On Their Way to School. They are the offspring of over 270 million migrant-worker parents who, constrained by poor or nonexistent employment options offered in the countryside, flock to China’s factories, mostly in coastal cities, to make their wages.

A long-standing discriminatory policy denies many migrant workers the opportunity to settle down in the cities with their families. Through the hukou—the Chinese regime’s household registration system—rural children are barred from enrolling in urban schools or enjoying other public amenities. With few options other than to leave their children at home, migrant laborers are bound by virtue of birth to their rural communities.

In 2014, the Caring Center conducted a survey of over 2,000 left-behind children from rural areas in six provinces. Based on the results, an estimated 10 million children did not even see their parents during the Chinese Lunar New Year, one of the most important occasions for family gatherings. One or two phone calls was the extent of their contact.

The impact on these children can be severe. According to the Institute of Psychology of the Chinese Academy of Sciences, 34 percent of them showed suicidal tendencies; 70 percent exhibited “psychological problems at different levels,” the caring center reported.

According to the report, the children worst-affected were those who saw their parents less than once every quarter. Many said that just being able to speak with their parents once or twice a week would significantly ease their depression.

“We found that reading, studying, and proper entertainment could effectively improve their self-esteem and mental health. The presence of the mother at home is also very important,” said Li Yifei, a professor of education at Beijing Normal University and the author of the NGO’s report.

A Long-Term Solution and Family Integrity

While top regime leaders, including Communist Party chief Xi Jinping and Premier Li Keqiang, expressed condolences for the children who committed suicide in Guizhou, Chinese economist and author He Qinglian, who lives in New Jersey, sees the suicides as an indication of the state’s glaring failure to support left-behind children and enact fair policies toward the migrant worker population in general.

Rural schools and authorities could ease the plight of left-behind children by offering counseling and hiring guardians, He Qinglian wrote in an article published on Voice of America. But any long-term solution will have to reunite the migrant workers with their families. She advocates the integration of migrant workers into urban life, which would mean abolishing the hukou system.

“The Chinese government has to acknowledge reality by allowing urban ‘villages’ and reduce living costs in the city. Children must be allowed to go to schools near their place of residence, not according to the household registry. Only this can cut down the number of left-behind children and provide them a normal family life,” He Qinglian wrote.

“The problem of left-behind children is unique to China. In other developing countries, people migrate with the entire family,” she wrote.

The problem of left-behind children is unique to China. In other developing countries, people migrate with the entire family.
— He Qinglian

While allowing whole families to move does raise the question of an increasing slum population, the advantage, He said, is social, “The family stays together to face their stress and enjoy the few pleasures they have together.”

It’s not a shift the Chinese regime seems to be willing to make. Urban slums have long been portrayed in Chinese communist politics and media as a prime symptom of the archetypal oppressive capitalist society. At the same time, Chinese leaders wish to avoid the real effects associated with exploding numbers of urban poor.

On June 18, the Chinese-language edition of the Financial Times reported that Beijing is expanding from 15 to 28 the number of documents outsiders must obtain before gaining residency rights. This includes work permits, signed labor contracts, marriage and childbirth certificates, and tax records.

‘A Chinese Dream With No Implementation Date’

Premier Li, aware of the lopsided concentration of wealth and urbanization in coastal China, wants to encourage industrial transfer between the eastern and western parts of China, He Qinglian wrote. But standing in the way of these ambitions is the fact that the Chinese economy is on a downturn.

China stands to lose 124 million jobs this year, He wrote, and employment in the countryside is hard to come by. The shift—from driving peasants to the cities to provide cheap labor to calling them back to their rural homes—is a sign that China is losing its status as the world factory, she said.