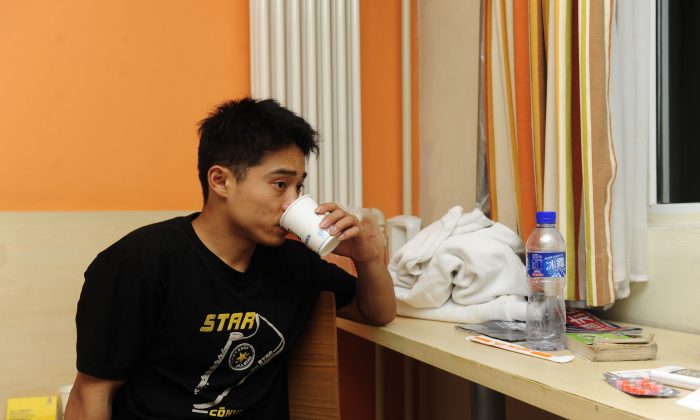 Zhang Shangwu has a drink after an interview at a hotel room in Beijing on July 18, 2011. The champion gymnast forced to turn to begging after injury ended his career prematurely due to an injury. He became a media sensation in China after a fan recognized him eking out a living on the streets of Beijing. Zhang's case throws the spotlight on the plight of top athletes in China, who are taken from their homes as young as five only then to be abandoned and forgotten when they are no longer able to compete. (STR/AFP/Getty Images)
China

Abandoned by the State, Former Chinese Athletes Struggle After Sports

Zhang Huikang, a middle-aged man from Shanghai, makes his meager living selling sports-themed lottery tickets from a street kiosk. It’s a long drop from his life in the late 1980s, when he was a professional goalie and on the roster for the Chinese soccer team slated to compete in the 1988 Seoul Olympics.

But in 1991, when Zhang suffered a head injury while playing for Hong Kong’s South China Football Team, he was weeded out and soon retired in 1993 at the age of 31. Aside from his kiosk, which Zhang runs with his mother, he also receives a monthly pension of about 135 yuan (about $20).

For many of these fallen heroes, the Chinese expression “men to robbery, women to prostitution” is painfully apt.

He is just one of hundreds of thousands of young athletic men and women fed into the Chinese state sports system and discarded for their failure to produce medals. Many of them, scooped up as children, are denied a normal education and put through grueling fitness regimes, leaving them with no safety net if they don’t make the cut or once they inevitably stop winning.

For many of these fallen heroes, the Chinese expression “men to robbery, women to prostitution” is painfully apt. Having missed out on a college-track education, the former athletes struggle to find work, and often find themselves driven to shady or degrading jobs.

About 45 percent of athletes in China become unemployed upon retirement, according to a 2010 report by the state-run media Nanjing Daily.

Tang Ying, a 6-foot-3-inch woman from China’s Hunan Province born in 1986, began training to be an Olympic diver with a local sports institution at age 12. When she didn’t make the cut for the 2004 Athens Games, she was retired two years later and left with little to show for it—aside from damaged joints that ache when it rains and added health risks should she become pregnant.

Tang then tried to become a P.E. teacher, but found that the official offering her the job instead wanted to make intimate advances toward her, as Xinhua, the state-run news agency, reported in 2007.

In another incident, she tried to get a human resources job in her hometown, but was told that she would get the position only if she were willing to become a Party official’s mistress.

Working at a clothing store for only about $120 a month and selling dolls on the street in her spare time, Tang told Xinhua that many of her fellow athletes had become kept women.

Those who finish last have given tearful, televised apologies for ‘shaming the motherland’ or have been branded as failures by the media.

From Injury to Incarceration

The People’s Republic of China has participated in the Olympic Games since 1980, but it was in the early 2000s that the regime made a priority of scoring gold medals at all costs. In 2002, the state started Project 119, which sank vast sums and dedicated previously unheard-of efforts into producing gold medalists, primarily in individual sports like swimming or track and field.

Athletes are under tremendous pressure to succeed, as state media makes their performance a matter of national pride. Those who finish last have given tearful, televised apologies for “shaming the motherland” or have been branded as failures by the media.

Like Tang Ying, Zhang Shangwu of Hebei Province in northern China was chosen to train for a place on the national Olympic team at the age of 12. Zhang became a gymnast and won two gold medals at the 2001 Beijing Summer Universiade at the age of 18. He was hailed as a rising star, as described on the Chinese Baidu website.

But in 2002, Zhang tore his Achilles tendon during training, dashing any hope of him competing in the 2004 Olympics. Back in Hebei, his coaches ignored his injury and gave him increasingly difficult moves to master. He left the system in 2005 and, unable to get any compensation, turned to street performances.

This was a punishing life. Zhang is short—below the 5-foot-5-inch height required for a prospective job as a security guard—and often slept in internet cafes or under bridges. He sold his gold medals for about $15 each at an antique market.

In 2007, Zhang became a thief. He was caught stealing from various sports schools in Beijing and was sentenced to over four and a half years in prison.

When attending one of China’s thousands of sports schools, students often lose the opportunity to learn the subjects covered in ordinary education, something a prospective college student cannot do without given the country’s extremely competitive entrance exams.

Athletes not employed directly by the state enjoy no benefits at all after retirement. The Nanjing Daily reported that while there were 33,294 athletes in China, only 17,444 of them were on the official payroll.

Even those entitled to state benefits receive paltry sums for their service—the typical compensation is about $150 a month.

Liu Chengju, a former weightlifter from northeastern China and the widow of a fellow weightlifter who died of a respiratory ailment last year, was diagnosed with breast cancer in 2013, the news outlet Sina reported this June. Her family is now 70,000 yuan (about $10,500) in debt.

In their home in Fushun, Liaoning Province, Liu has only a few bags of clothes, some furniture, and a picture of her husband winning the weightlifting championship in the 1990 Asian Games.

With some irony, Liu recalled how she considered herself lucky as she was one among three people in a group of 30 selected to attend a sports college in Liaoning in the late 1980s. She was 15 then.

Liu wants her daughter, who suffers from asthma, to study nutrition and live a normal life.

“I went to the sports college at 15 and I retired at 25,” she told Sina. “This ten-year-stretch of my life was like blank space—it slipped away in an instant.”