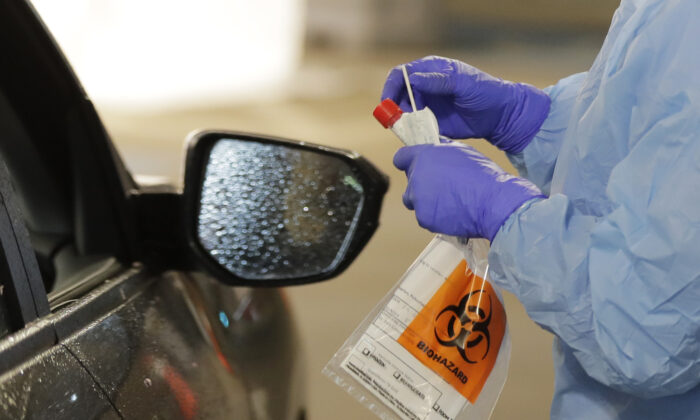 A nurse at a drive-thru coronavirus testing station in Seattle, Washington, on March 13, 2020, (Ted S. Warren/AP Photo)
By Jamie Joseph

SANTA ANA, Calif.—As the need for medical personnel skyrockets due to the CCP virus, frustrated California health care workers anxious to help are finding themselves hampered by the state’s new AB 5 law, which inhibits independent contractors.

Blunk taught some of the courses required by certified nursing assistants (CNAs)—but that came to a crashing end when Assembly Bill 5—signed last year by Gov. Gavin Newsom—stopped her, leaving them unable to finish their requirements.

“If you don’t have your hours, you can’t work,” said Blunk.

Health care workers in California are mandated by the Department of Public Health to complete a set amount of continued education units every two years, in order to renew their licenses.

“So, I can guarantee you that CNAs … the ones who don’t have their hours done—they’re having panic attacks right now,” she said.

Unless the state overhauls the new regulation, “we can’t offer them classes via Skype or Zoom,” Blunk said. That leaves willing health care workers unable to work, at a time when they are needed most.

“So, when your loved one is in the hospital or you’re in the hospital, they’re the ones who’s getting your water, who’s changing your bed, who’s cleaning your bottom, who’s emptying the bed pans,” said Blunk. “They do the hands-on physical care.”

One of the job postings, located in San Diego, was listed in “urgent need”—recruiting registered nurses to conduct COVID-19 phone screenings—a job Blunk said she could handle if restrictions were relaxed.

“So somebody like me, I am educated enough,” said Blunk. “You know, if CDC put some guidelines in and said, ‘Okay, can you screen these calls all day?’ And then I could point them in the right direction: ‘Yes, this is an emergency room visit,’ or, ‘No, this is you need to stay home.’”

She added: “But then there’s too many barriers, and then here’s what would happen with me personally: If I make too much money, I’m going to lose my Social Security, which I need for the long-term. But if I can stay in business, then I can deduct everything. And it works.”

Assembly Bill 5 requires companies to hire independent workers as employees rather than classify them as contractors.

Blunk is legally disabled—with 35 benign bone tumors on her body—so being an independent contractor allowed her to set her own schedule. But that ended when the new AB 5 law went into effect on Jan. 1.

“The woman I was getting my work from opted not to transition me to employee status,” Blunk explained.

Blunk was approached by another organization to start teaching some of its health care workers—but “all classes have been canceled” due to the CCP virus pandemic.

The AB 5 law is “so wrong, in so many aspects,” Ildiko Santana told The Epoch Times. “Yet, we have been repeating ourselves like broken records.”

Santana has worked for the past 20 years as a freelance medical and legal translator, translating documents from Hungarian to English and English to Hungarian. AB 5 has limited her ability to utilize her skills in the fight to control the spread of the CCP virus.

“I know there is currently a higher demand to provide workers with timely information related to COVID-19 in various languages other than English,” she added.

Health care providers are seeing an increase in patients who do not speak English or are “limited English proficient,” according to a medical blog posted on the translator-employment website Interpretertrain.com on March 16.

U.S. health care providers “need to be prepared to treat and communicate with every patient that may come through,” the blog stated, citing the need for both in-person and remote medical interpreters.

“During a pandemic, this goes beyond individual translators and interpreters losing their livelihoods,” said Santana. “Multitudes of those who would enjoy their services are potentially left in the dark and put in harm’s way.”

She called the law, which limits her ability to provide translation services as an independent contractor, “immoral, criminal, and in this age of high-tech—when such services do not require physical proximity—completely unacceptable.”

“Some of us are becoming suicidal,” she added.

Kathy Seress, a medical technician for 20 years, used to travel all over the country, teaching health care workers how to operate specialized medical devices.

Her area of expertise was known as videonystagmography, a technology used to test inner ear and motor functions.

But when AB 5 passed, the company she worked for could no longer afford to reimburse her for those trips. Instead, they hired her as an hourly employee, limiting the hours of work she was permitted.

As an employee, she is no longer able to deduct her travel expenses.

“We medical personnel need our 1099s,” she told The Epoch Times, referring to the tax filing which allowed for the deductions.

She used to be able to deduct her office, supplies, auto, and lab coat expenses. “And now I am hourly, and do not get reimbursements,” she added.

“I have a room—I have a special machine there—where I set up to fuse the blood. You know, I can’t separate the blood on my kitchen table,” she said.

“So I have a special room. I have to wear special equipment.”

However, due to the CCP virus outbreak, many of those scheduled exams have been canceled—and she remains essentially out of work.

With their wide variety of skills desperately needed, medical personnel affected by AB 5 have taken to social media to request exemptions.

Thousands of independent contractors throughout California have been calling on state legislators to repeal the bill, arguing that it has had an adverse effect on dozens of industries, including the health care sector.

While those negatively affected by AB 5 are calling for the bill to be suspended immediately, lawmakers are at odds with what’s best for independent contractors during the pandemic.

Assemblywoman Lorena Gonzalez (D–San Diego), who helped write the original bill, has been adamant about keeping AB 5 in place.

“Proper employee classification is essential because at times like this, it’s important all employers have been paying their fare (sic) share into the fund,” she wrote on Twitter.

Assemblyman Kevin Kiley (R–Sacramento) has been vocal in his opposition, often detailing stories of contractors who lost their livelihoods due to the controversial law and advocating for them to be included in government stimulus packages.

“It appears the federal Stimulus Package may include income replacement for independent contractors based on recent earnings,” Kiley wrote on Twitter on March 22.

“I’m encouraging Members of Congress to make sure this doesn’t exclude Californians whose earnings dried up over the last few months because of #AB5.”

Nearly 57 million independent contractors across the country work freelance jobs, making them ineligible to qualify for unemployment benefits—though self-employed individuals may be included in the country’s $1 trillion relief package stimulus.

On March 19, Kiley planned to bring an additional bill to a vote on the assembly floor that would give enforcement of AB 5 a grace period—but due to the virus, the meeting was indefinitely canceled.

“Since the Legislature won’t meet for several weeks, unfortunately the only chance now for immediate relief from #AB5 is for the Governor to suspend it,” Kiley wrote on Twitter on March 16.

“I will urge him as strongly as I can to exercise this power.”

Health care practitioners eager to aid overwhelmed medical services in slowing the spread of the CCP virus agree, and are calling on legislators to repeal the bill as an emergency resolution.

But until then, many freelance health care professionals will continue to feel frustrated—ready, willing, and able to contribute to the ongoing efforts to contain the CCP virus, but unable by law to do so.