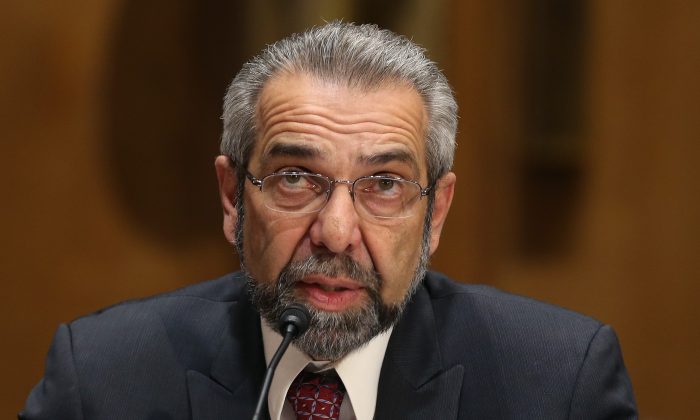 Robert Romasco, president of AARP at the time, testifies during a Senate Finance Committee hearing in Washington, D.C., on Dec. 18, 2013. The committee was hearing testimony on Social Security for seniors and private retirement accounts. Romasco was succeeded as AARP president in June 2014 by Jeannine English. (Mark Wilson/Getty Images)
Opinion

AARP Not Representing the Public Interest in Social Security Debate

Millions of Americans trust the AARP to look out for them and their interests. But my personal experience with the AARP, during my long struggle to expose the Social Security fraud, leads me to have grave doubts about the AARP’s commitment to its members and the public in general. Having been a member of the AARP throughout my adult life, I expected it to enthusiastically support my efforts to expose the Social Security fraud. But I was very wrong.

When my first Social Security book, “The Looting of Social Security,” was published in early 2004 by a New York publisher, I sent multiple copies of the book, and a personal letter, to William Novelli, CEO of the AARP at the time. When I received Novelli’s letter of response, dated April 9, 2004, I was shocked by its content.

Novelli scolded me, severely, for daring to write a book about the looting of Social Security. Novelli did not deny that looting was taking place, but he was adamant about the importance of keeping the public from finding out about it. He wrote, “Saying that the trust funds have been looted could result in people losing confidence in Social Security, and that is counterproductive.” Novelli made it clear that he wanted no further contact with me, so I tried to contact other top officials at the AARP, but none of them would respond to me in any way.

‘May Life Be Fair’

I still wanted to talk to someone from the AARP, so I checked the list of new AARP board members who would begin their terms the following year. One of the new board members was a physician who practiced medicine in Orlando, just about 50 miles from where I live. I sent an email to the physician, through his private practice, and the doctor responded to my email in a cordial manner. He said he would do whatever he could to help. He apologized for the behavior of fellow AARP officials, and he seemed puzzled that nobody from the Washington office would communicate with me. I asked him if he would read my book, if I mailed a copy to him. He agreed to do so.

We exchanged emails for about three weeks, and I began to envision him as my steppingstone into the hierarchy of the AARP. But, then the unexpected happened. I received the following two-sentence email from the doctor:

“Dr. Smith, I choose to have no further contact with you. May life be fair to both of us.”

I could hardly believe it. After numerous cordial email exchanges, why would the doctor end the correspondence this way? I emailed the doctor several times, seeking an explanation. Finally, I suggested that I drive to Orlando and meet him for dinner, at a restaurant of his choosing so we could have a private, confidential conversation. I waited and waited, and I hoped and hoped that he would get back in touch with me, but I never heard another word from the good doctor from Orlando. I am still somewhat haunted by the last sentence of the doctor’s last email to me. “May life be fair to both of us.” What did he mean by those strange words?

That final message from the doctor in Orlando was also the final communication that I received from anyone at the AARP. It has now been more than 10 years since I sought the support of the AARP to help me expose, and bring to an end, the looting of Social Security.

In 2004 when I sought the assistance of the AARP to end the looting, the cumulative total of surpluses generated by the 1983 payroll tax increase was $1.6 trillion. Today, the cumulative total is $2.7 trillion. Just since 2004 $1.1 trillion of additional looting took place. If the looting had been ended in 2004, and all remaining Social Security surplus had been invested in marketable U.S. Treasury bonds, the trust fund would today hold $1.1 trillion in “good-as-gold” marketable Treasury bonds that could be sold for cash at any time.

With more than 37 million members, the AARP has enough political muscle to force the government to repay the misappropriated $2.7 trillion that it owes Social Security. Are the leaders of the AARP giving a higher priority to the government and its political cronies than to its dues-paying members and the public?

Allen W. Smith taught economics to college students for 30 years before retiring as professor of economics at Eastern Illinois University in 1998. Smith has written eight books, including a high school textbook, “Understanding Economics,” published by Random House, which was used in more than 600 schools in 48 states. Dr. Smith has appeared on CNN, CNNfn, CNBC, and more than 200 radio talk shows. He holds a doctorate in economics from Indiana University. Copyright 2014 Allen W. Smith. ironwoodas@aol.com www.thebiglie.net.