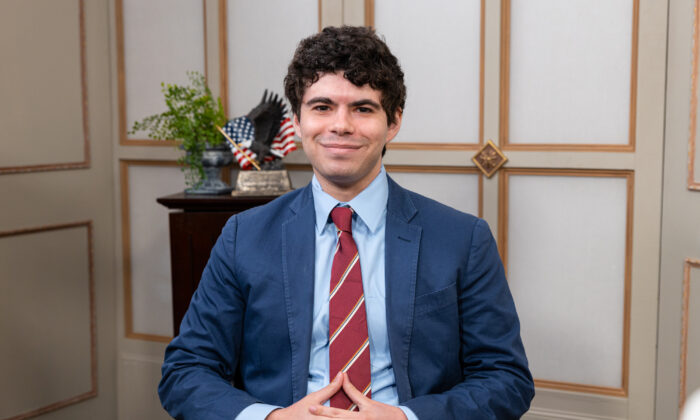 Aaron Sibarium, a writer for the Washington Free Beacon and the former opinion editor of Yale Daily News, in Washington on May 31, 2022. (Matthew Pearson/CPI Studios)
Cancel Culture

Aaron Sibarium on Woke Law Students: ‘A Transformation of Legal Institutions From Within’

The rise of woke ideology and the subsequent erosion of open debate at prestigious law schools is transforming America’s legal institutions from within, warns Aaron Sibarium, the writer behind the Washington Free Beacon’s reporting of ongoing hostilities toward conservative law students at Yale University.

In May, a report by Sibarium drew renewed attention to the Ivy League school in the wake of a leaked draft opinion signaling that the Supreme Court’s conservative majority may overturn the Roe v. Wade decision. According to the report, progressive Yale Law students reacted to the news by encouraging each other to harass and intimidate their conservative peers.

A Yale graduate himself, Sibarium is no stranger to intimidation from the campus left. He saw it first-hand in 2015, when angry student activists accused a pair of professors of threatening their safety just because the two disagreed with the idea of censoring “culturally insensitive” Halloween costumes.

“I became the opinion editor of the Yale Daily News right at the time this sort of explosion of woke activism began on college campuses,” Sibarium said in a recent interview on EpochTV’s “American Thought Leaders.” “I was the one who had to edit everyone’s op-eds about the controversy, including op-eds from the wokest of the woke Yale students.

“So I got to see how they think up close, and that was all rather startling to me,” he told host Jan Jiekelek, noting that the intolerance exhibited by the progressives accelerated his “disillusionment with mainstream progressivism” and led him to befriend conservatives.

“If you’re disillusioned with mainstream progressivism, who on campus is going to be friendly with you? Well, it’s conservatives, right?” he said. “Even if you don’t agree with them on abortion, they’re not going to call you racist or sexist for believing in free speech.”

This woke activism, according to Sibarium, has since taken over Yale Law School, where progressive students are now openly recommending that conservative classmates be hit with “unrelenting daily confrontation” for daring to agree that Roe should be overturned.

“That’s not unique to Yale Law School,” he added, noting that although the situation varies from school to school, law students are generally “very afraid to [even] play devil’s advocate in the classroom” because of the dire consequences of being remotely at odds the leftist orthodoxy.

“I’ve heard stories about kids being raked over the coals for merely offering a hypothetical defense of a [Supreme Court Justice Antonin Scalia] dissent,” he said. “The kind of adversarial culture that’s supposed to characterize law school classrooms has really, really eroded.”

When asked about the “downstream effect” of the prevalence of woke ideology in law schools, Sibarium said it’s going to be contrary to what many people think, where the slightest controversy in the courtroom could bring a young woke lawyer to meltdown.

“If all these kids just [have a] meltdown the moment they get into an adversarial context, that’d be great. They’d have no power,” he said. “The problem is that they don’t actually melt down. What they’re going to do is transform various legal institutions from within—sort of prosecute a substantive ideological agenda through courts and government agencies.”

“There’s a lot of ways in which you can make the profession less hospitable to opposing points of view,” Sibarium said. For example, major law firms may become less willing to take cases involving issues such as abortion and religious liberty, because “their younger staff will get really mad at them.” Big corporations that work with these law firms could also “implicitly threaten” to sever ties with a law firm that represents people deemed “problematic” by its woke employees.

“The whole premise of the American legal system is that everyone, no matter how unpopular, deserves legal representation,” he said. “John Adams famously defended the British soldiers accused of the Boston Massacre, and he said it was one of the greatest things he ever did for the fledgling Republic that he helped found. That ethos is just not there to the same degree today.”

Given how woke the young generation has become, Sibarium remains unsure whether it has reached its peak yet.

“What worries me is that even if we’re fine in the long run, and eventually that the regime collapses under the weight of its contradictions, it can do a lot of damage in the meantime,” he said. “Ultimately, what this will depend on is whether this generational tidal wave of young woke people can be shocked out of their ideology once the cost of it really starts to pile up.”