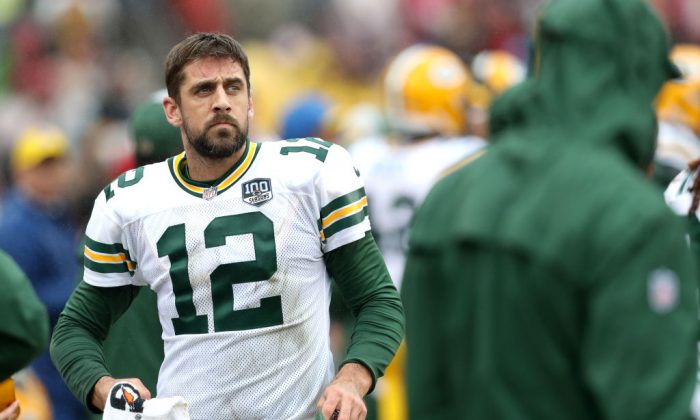 Quarterback Aaron Rodgers (#12) of the Green Bay Packers looking on from the sidelines in the second half against the Washington Redskins at FedExField in Landover, Md., on Sept. 23, 2018. (Rob Carr/Getty Images)
NFL

Aaron Rodgers Confirms He Is Unvaccinated, Is Disappointed in Media Reports

Three-time NFL Most Valuable Player Aaron Rodgers confirmed Friday that he has not taken the COVID-19 vaccine, citing what he says is an allergy to an ingredient in the most commonly used vaccines.

“I realize I’m in the crosshairs of the woke mob right now,” Rodgers said in an interview with former NFL punter Pat McAfee and former Green Bay Packers teammate A.J. Hawk on Friday. “So, before my final nail gets put in my cancel culture casket, I think I would like to set the record straight on so many of the blatant lies that are out there about myself.”

Rodgers, who said the Packers knew his vaccination status, then confirmed reports saying he hasn’t received the vaccine.

“I’m not an anti-vaxx, flat-earther. … I have an allergy to an ingredient that’s in the mRNA vaccines. I found a long-term immunization protocol to protect myself, and I’m very proud of the research that went into that,” the Packers star said. Rodgers said he doesn’t want to receive the Johnson & Johnson vaccine, which doesn’t use mRNA technology, due to potential side effects.

NFL rules regarding COVID-19 and vaccines “are not based in science at all,” Rodgers said in the interview. “They’re purely trying to out and shame people, like needing to wear a mask at a podium when every person in the room is vaccinated and wearing a mask–makes no sense to me.”

“If you got vaccinated to protect yourself from a virus I don’t have as an unvaccinated individual, then why are you worried about anything I could give you?” Rodgers asked, echoing a common refrain against vaccine mandates.

The Packers superstar said he consulted with podcaster and comedian Joe Rogan, who recovered from COVID-19 earlier this year, about alternative treatment methods.

Rodgers continued to say that he has “followed every single protocol to a T—minus the one I just mentioned because it actually makes no sense to me. My daily routine is the routine of an unvaccinated person.”

During the interview, Rodgers confirmed his COVID-19 case, saying he’s experienced mild symptoms but “feels really good.” The Packers quarterback didn’t know when he would return to the field or what protocols he would have to adhere to going forward.