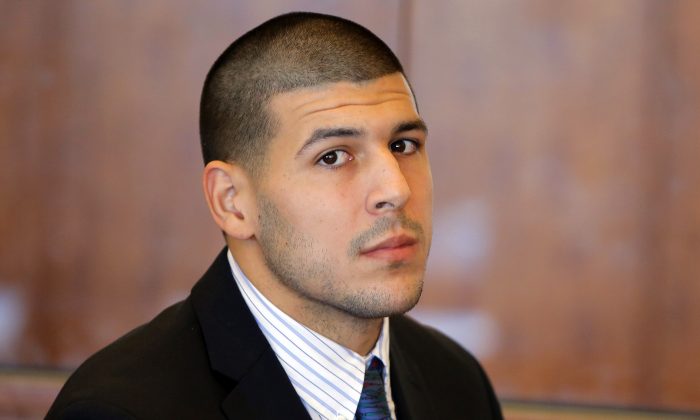 FILE - In this Oct. 9, 2013 file photo, former New England Patriots NFL football player Aaron Hernandez attends a pretrial court hearing in Fall River, Mass. Hernandez is due in court Wednesday, May 28, 2014 to be arraigned on murder charges for allegedly ambushing and gunning down two men in 2012 after a chance encounter inside a Boston nightclub. (AP Photo/Brian Snyder, Pool, File)
NFL

Aaron Hernandez: Report Says He Didn’t Get New Tattoo While in Jail

Aaron Hernandez didn’t get any new tattoos while in jail, according to a report, which contrasts other accounts.

Earlier this month, it was reported Hernandez’ tattoos would be examined by prosecutors to see if there are any that are connected with gangs.

Previous reports said he got a new one on his hand. They said that one saying, “CBS/WBS IWBTG,” was done while in jail.

Hodgson said the tattoo and all his others weren’t done while he was in jail.

TMZ also posted a photo showing the “CBS/WBS” tattoo on his hand a year ago when he was arrested.

The news comes amid other reports saying Hernandez is having trouble coming up with the money to pay his lawyers to fight the murder charges against him. The 24-year-old ex-NFL star faces two separate murder indictments–one for the killing of associate Odin Lloyd last year and another for the slaying of two men in South Boston in 2012.

Prosecutors trying to convict former New England Patriot Aaron Hernandez in a pair of homicide cases could try to use the one-time football star’s tattoos against him: They are seeking the artists who worked on Hernandez, saying they could be witnesses.

Criminal justice experts, however, say it’s hard for law enforcement to determine whether someone with a tattoo linked to a kind of crime actually did the deed. As Todd Bettencourt, a tattoo artist in North Attleborough, Massachusetts — the town where Hernandez was living at the time of the killings — said, “some people just get it because it’s cool.”

Much of Hernandez’s upper body is covered in tattoos: The open-mouthed face of a lion sits atop his right bicep, ringed by the words “It’s about the fight in you;” ”1989,” his birth year, spans the fingers of his left hand and a 10-word phrase favored by his father, “If it is to be it is up to me,” runs down his left forearm.

It is Hernandez’s right forearm that has piqued the interest of investigators, though they will not specify which design they have focused on.

Photos of Hernandez show he has had five stars and other tattoo work added to his right forearm over the past few years. While many star tattoos have nothing to do with crime, they can sometimes be used to represent killings, said Kevin Waters, a criminal justice professor at Northern Michigan University and former agent with the federal Drug Enforcement Administration.

“I would say the cops probably see the stars and know in some circles that a star does represent a kill and want a tattoo artist to come in and see if he (Hernandez) said anything about that,” Waters said.