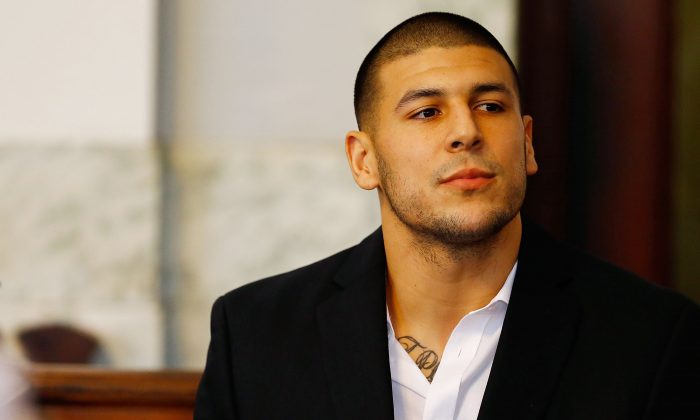 Aaron Hernandez once had a promising career as a young tight end for the New England Patriots before being convicted of first-degree murder. (Jared Wickerham/Getty Images)
NFL

Former New England Patriots tight end Aaron Hernandez—who was convicted of first-degree murder last summer—still has plenty of love for his former quarterback Tom Brady, according to a letter sent by Hernandez from the Souza-Baranowski Correctional Center on Dec. 10, that was obtained by TMZ.com.

“The closest I was with was probably Brady and whom I love to death and always will and only hope the best for them.”

In the letter—that was sent to a female pen pal—Hernandez reveals that he still keeps up with his former team. “I have a TV in my cell! And yes I still root for my squad and still love all the ones I loved.”

What Hernandez’s relationship is to the intended recipient isn’t clear after he starts off the letter telling her to, “tie a cinder-block to your ankles and jump in a deep body of water,” in response to her criticism from a previous correspondence.

But back to his former teammates. Hernandez says he’s cool with “Julez” (probably Julian Edelman) and Branch (Deion) while calling “Gronk” the “BEST TE ever to walk on a football field.”

But Hernandez didn’t have the same praise for Patriots owner Bob Kraft, who he called fake and non-loyal saying he “told me he loved me every time he seen me but obviously shows his word ain’t [derogatory term omitted].”

Kraft released the then 23-year-old tight end on June 26, 2013 after Hernandez was arrested in the investigation of the murder of Odin Lloyd, the week before in North Attleboro, Mass. Hernandez was convicted in 2015 of first-degree murder and sentenced to life without parole.

Hernandez was drafted by the Patriots in the fourth round of the 2010 NFL Draft. The big tight end fell in the draft after character concerns caused his stock to drop. Once drafted, he showed plenty of talent on the field though, catching 79 passes for 910 yards and seven touchdowns in just his second season.

The Patriots then signed him to a $40 million extension in August of 2012, that included a $12.5 million signing bonus.

In three seasons in the NFL—all with New England—Hernandez totaled 1,956 receiving yards, 175 catches, and 18 touchdown receptions.