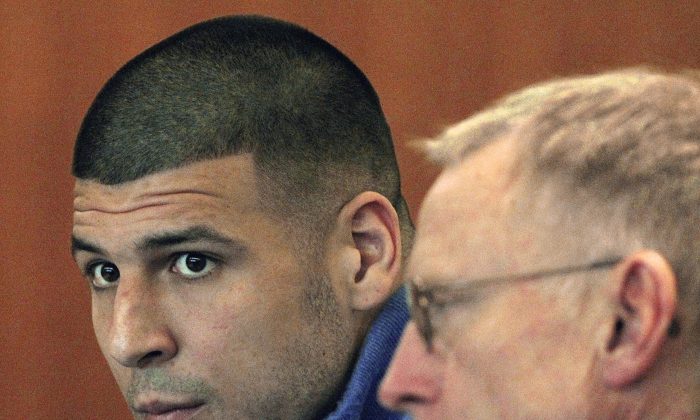 An article saying Aaron Hernandez was found not guilty and will return to the New England Patriots next year is fake. In this Oct. 1, 2014 file photo, former New England Patriots football player Aaron Hernandez, left, and his lawyer Charles Rankin attended an evidentiary hearing at Fall River Superior Court in Fall River, Mass., where he faces charges in the 2013 shooting death of Odin Lloyd. Lawyers for Hernandez are due in court Tuesday, Nov. 25, 2014, on issues in a separate case, where Hernandez is charged in the 2012 fatal shootings of two men after a chance encounter in a Boston nightclub. (AP Photo/The Boston Globe, Wendy Maeda, Pool, File)
Life & Tradition

Aaron Hernandez Not Guilty? Nope, ‘Will Return To The New England Patriots For 2015 Season’ is Fake; Not Innocent

An article saying Aaron Hernandez was found not guilty and will return to the New England Patriots next year is fake.

It was published on a satirical website, ExtraWire. The site doesn’t have a disclaimer, but none of its articles are real.

As hoax-debunking site Snopes.com notes: “The Extra Wire does not clearly label itself as an entertainment publication, and without a proper disclaimer page many people believed that the information provided in the satirical story quoted above was indeed factual. But judging by the other articles published by the Extra Wire, including “Catcalling To Be Punishable By 20 Years In Prison” and “Louisiana Village Elects A Dog To Congress,” it is clear that this is not a trusted source for news.”

Hernandez, a former tight end in the NFL, won’t begin his murder trial until next year. Jury selection begins in January 2015.

A number of people Facebook and Twitter apparently believed the story, and it had tens of thousands of shares as of Sunday.

Here’s what part of the article says:

Bristol County, CT – Aaron Hernandez has reason to celebrate today, as Judge E. Susan Garsh has ruled to drop all current charges against him due to a lack of evidence. Shortly after the decision was made, the NFL expressed that they would be glad to bring Hernandez back, along with Bill Belichick who let it be known that he is welcome to come back as a tight end for the team.

Hernandez will still need to undergo some extensive training due to his muscles tightening up while in prison, but the strength he has built up during his time in lockup may help him as a lineman. Some are worried about his wide receiver capabilities, citing that prisoners can lose a tremendous amount of coordination while being locked in a cell for a long period of time, but it seems that Hernandez still has it in him.