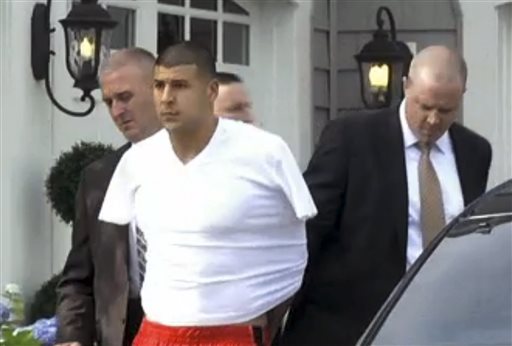 In this image taken from video, police escort Aaron Hernandez from his home in handcuffs in Attleboro, Mass., Wednesday, June 26, 2013. Hernandez was taken from his home more than a week after a Boston semi-pro football player was found dead in an industrial park a mile from Hernandez's house. (AP Photo/ESPN)
News

Aaron Hernandez, who was charged with murdering an associate this week, was linked to the Bristol Bloods gang, based in Bristol, Conn., according to a report.

TMZ obtained a photo of who appears to be Hernandez, wearing red, flashing a purported gang sign for the Bristol Bloods. At the time the photo was taken, Hernandez was a 17-year-old high school student.

The website also pointed out that Hernandez, 23, has a red “blood” tattoo on his right hand.

On Thursday, another photo of Hernandez surfaced of him holding a gun in front of a mirror. He was also wearing red.

And police are also investigating his possible involvement in a 2012 double murder.

Odin Lloyd, the victim in the case whose body was found in North Attleboro last week, may have learned about Hernandez’s alleged involvement in the double murder, according to the Boston Globe.

Authorities said that the gunman in the July 2012 incident fired a number of times into a car, hitting Daniel Abreu and Safiro Furtado, reported the Globe. When the driver, Abreu, stopped at a traffic light, a gunman in a gray SUV opened fire and killed the two.

Hernandez was charged with the murder of Lloyd on Wednesday, and he was denied bail.