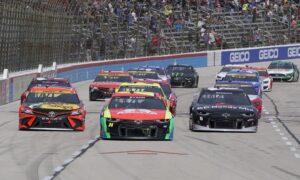 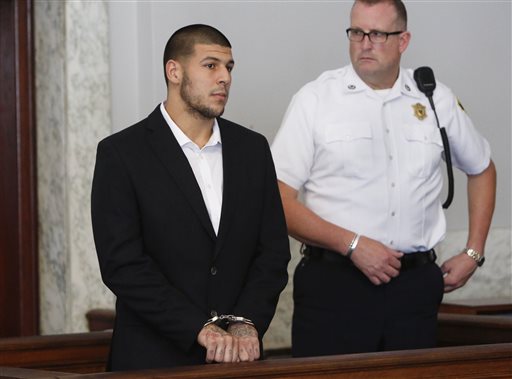 Former New England Patriots NFL football tight end Aaron Hernandez, left, appears at Attleboro District Court on Wednesday, July 24, 2013, in Attleboro, Mass. Hernandez has pleaded not guilty to murder in the death of Odin Lloyd. Hernandez was in court for what was supposed to be a probable cause hearing, but prosecutors said the grand jury is still considering the evidence against him. A judge rescheduled the probable cause hearing for Aug. 22, after considering defense objections to a delay. (AP Photo/Bizuayehu Tesfaye)
Sports

Aaron Hernandez penned another letter from jail to a fan, saying that he that he heard his young daughter call him “da-da” for the first time while he was incarcerated.

“I’m a great dude,” Hernandez told fan Collin Imm, who gave the copy of his letter to Radaronline.com. “Don’t believe all the negative publicity.”

“I miss my little girl terribly an (sic) my biggest fear of all is she won’t daddy,” he added.

Hernandez has a child, who is 9-months-old, named Avielle Janelle, with his fiancee Shayanna Jenkins.

Hernandez apparently sent the letter from the Bristol County House of Correction in North Dartmouth, Mass.

In a letter sent earlier this month, the 23-year-old former football star wrote a letter to another fan,  saying he is “not guilty.”

“All the people who turned on me will feel like crap,” he wrote. “I am a strong person and nothing will break me!”

But in that letter, he told the recipient to “keep [the letter] off social media!”

Hernandez is accused of murdering semi-professional football player Odin Lloyd, who was found dead less than a mile from Hernandez’s home in North Attleboro, Mass.

Last month, in a hearing, the judge in Hernandez’s case said that his probable cause hearing will be moved to a later date.