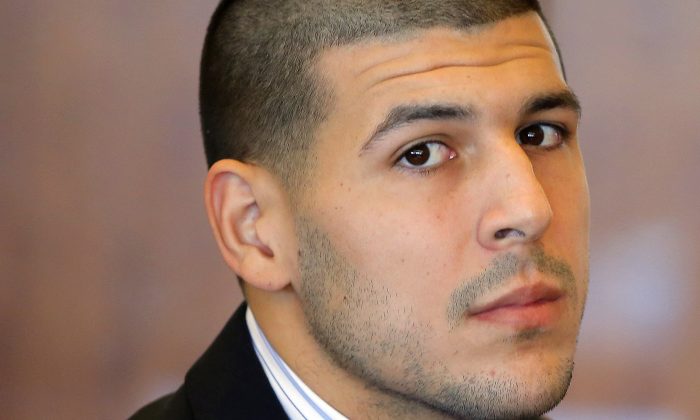 In this Oct. 9, 2013, file photo, former New England Patriots NFL football player Aaron Hernandez attends a pretrial court hearing in Fall River, Mass. Hernandez has pleaded not guilty to killing Odin Lloyd, 27, a semi-professional football player from Boston who was dating the sister of Hernandez's girlfriend. Police wrote in a June 28, 2013 search warrant application that there was probable cause to believe that Hernandez was driving a vehicle used in a separate double slaying of Daniel Jorge Correia de Abreu and Safiro Teixeira Furtado, in Boston, and "may have been the shooter." (AP Photo/Brian Snyder, Pool, File)
NFL

Ortiz, who was charged with being accessory to murder in the alleged Hernandez murder of associate Odin Lloyd last year, has another charge he has to worry about.

According to SI.com, Ortiz will be arraigned May 27 on other murder charges. It’s unrelated to the Lloyd case and he will face the charges at Fall River Superior Court in Massachusetts.

Hernandez last week was indicted in the same court for assaulting another inmate in jail on Feb. 25.

Hernandez, who is from Bristol, Connecticut, is being held without bail at the jail after pleading not guilty to murder in the June 2013 death of Lloyd, 27, of Boston. The body of Lloyd, a semi-professional football player dating the sister of Hernandez’s girlfriend, was found not far from Hernandez’s North Attleborough home.

Prosecutors said they would have no further comment on the new charges before his arraignment, which has not been scheduled. His attorney did not return a message seeking comment.

The county sheriff has said Hernandez was involved in a Feb. 25 scuffle with another inmate but neither of them required medical attention.