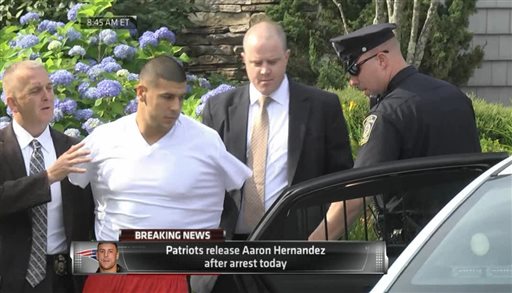 In this image taken from video, police escort Aaron Hernandez from his home in handcuffs in Attleboro, Mass., Wednesday, June 26, 2013. Hernandez was taken from his home more than a week after a Boston semi-pro football player was found dead in an industrial park a mile from Hernandez's house. (AP Photo/ESPN)
Sports

UPDATE: Aaron Hernandez was charged with murder and several counts of unlawful possession of firearms. He was also denied bail.

New England Patriots tight end Aaron Hernandez, who was arrested by Massachusetts police in connection with the murder semi-professional football player Odin Lloyd, will be arraigned on Wednesday.

Hernandez was taken from his home in handcuffs on Wednesday morning.

It is not clear what charges he will face, according to The Associated Press.

After he was arrested, the Patriots dropped him from the team’s roster, according to NBC News.

“A young man was murdered last week and we extend our sympathies to the family and friends who mourn his loss. Words cannot express the disappointment we feel knowing that one of our players was arrested as a result of this investigation. We realize that law enforcement investigations into this matter are ongoing. We support their efforts and respect the process. At this time, we believe this transaction is simply the right thing to do,” a statement from the Patriots said.