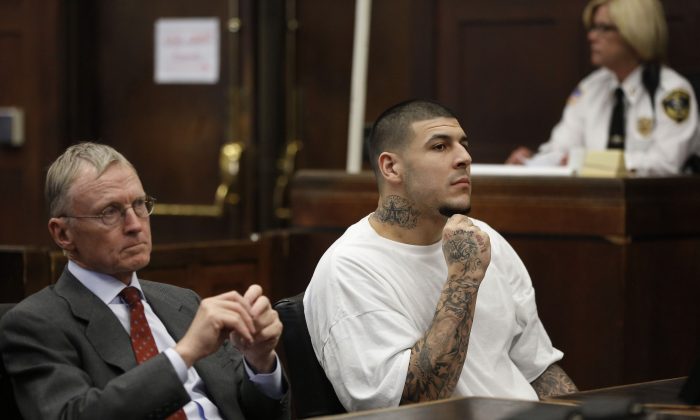 Aaron Hernandez Apparently Has A Bloods Gang Tattoo on His Neck, Photos Show

Aaron Hernandez, the former New England Patriots tight end who was convicted of murder several months ago, apparently has a Bloods gang tattoo on his neck, according to Deadspin and other reports.

He’s currently serving a life prison term without parole after being convicted for the 2013 murder of associate Odin Lloyd.

Hernandez, 26, appeared in court this week for a hearing for the 2012 murders of two men, Daniel de Abreu and Safiro Furtado, and the non-fatal shooting of a witness, Alexander S. Bradley, in July 2013. He has pleaded not guilty to the charges.

Deadspin wrote that he “wore a t-shirt that for the first time fully revealed a tattoo he got done earlier this year.”

The new tattoo on his neck wasn’t fully revealed until this week. Photos of the tattoo taken earlier this year were obscured by a suit Hernandez was wearing.

The tattoo reads “lifetime loyalty” over a five-pointed star–which is a common symbol used by the Bloods gang. It also features a skull and a spider web.

As Boston.com noted, Hernandez didn’t have the neck tattoo during his trial for the killing of Lloyd in April 2015.

In June 2013, when he was arraigned for the murder, old photos surfaced of Hernandez flashing an alleged Bristol Bloods gang sign while he was still in high school.

And, in May 2015, ABC News reported that Hernandez allegedly joined the gang and was involved in a gang-related prison fight.

“It was two-on-one, he was part of the two,” said a prison official, ABC reported at the time. Another source said it appeared “gang related.”

Officials also told the broadcaster that the former NFL standout had new tattoos that made references to the Bloods.

“The victim in the fight was some absolute nobody. He was just trying to show he’s down with the Bloods, a scared man looking at life in prison,” the source said.

On Wednesday, ESPN reported that the trial was postponed by Suffolk County Superior Court Judge Jeffrey Locke, who granted a motion by the defense council. Hernandez will return to court on Jan. 19 for a hearing.

“What I have here is a written motion, a joint motion, to continue the trial date,” the judge said, reported MyFoxBoston.

In the new murder case against him, Hernandez is alleged to have said, “I think I got one in the head and one in the chest,” referring to the two victims. The men were shot and killed at a traffic stop with a .38 caliber pistol. One of the men apparently spilled a drink on him at a Boston nightclub.

And Hernandez got in trouble earlier this month when he was caught with a shank inside of his cell at the Souza Baranowski Correctional Center in Massachusetts.

Before he was arrested, Hernandez appeared in the 2012 Super Bowl when the Patriots lost to the New York Giants and had signed a five-year deal with the Patriots worth about $40 million.