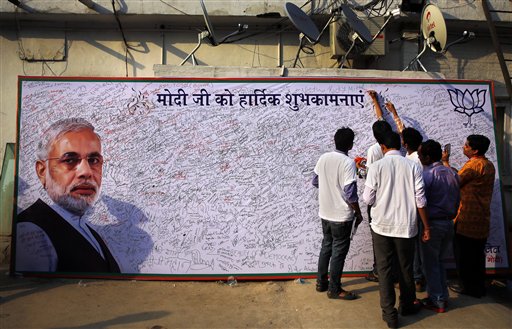 Bharatiya Janata Party (BJP) supporters write congratulatory messages for their leader Narendra Modi on a giant board at their party headquarters in New Delhi, India, Friday, May 16, 2014. Modi will be India's next prime minister, winning the most decisive election victory the country has seen in more than a quarter century and sweeping the long-dominant Congress party from power, partial results showed Friday. (AP Photo /Manish Swarup)
India

The elections in India have been covered extensively by a range of media outlets, including Aaj Tak, NDTV, and ABP News.

The coverage was brought both by broadcasters and newspapers, along with blogs and websites of both of the aforementioned.

Aaj Tak, ABP News, and India TV all nabbed interviews with Narendra Modi earlier in May, cementing wide-ranging coverage of the elections.

Aaj Tak has the largest share of the Hindi news segment at 18 – 19 percent, reported Business Standard, while the other two have 15 percent each. The shares of all increased sharply when Modi appeared on the respective programs–even the repeat telecasts drew large numbers of viewers.

“Modi is the talk of the town and it is no surprise the numbers are good. This election has given news a ratings boost,” Karthik Lakshminarayan, chief operating officer of Madison Media Ultra, told the Standard. The increased viewers led to higher advertising rates, with an anonymous planner saying the rates were up to 15 times higher than usual on election day.

Many of the outlets brought real time results of the election, which was dubbed historic as Modi unseated the ruling Congress party.

NEW DELHI—Opposition leader Narendra Modi will be India’s next prime minister, winning the most decisive victory the country has seen in more than a quarter century and sweeping the long-dominant Congress party from power, partial results showed Friday.

As his overwhelming win became clear, Modi appeared before a crowd of cheering supporters and tried to strike a conciliatory note after a lengthy and punishing race.

“I have always said that to govern the nation it is our responsibility to take everyone with us,” said Modi, whose slick campaign promised a revival of economic growth. “I want your blessings so that we can run a government that carries everyone with it.”

Although Modi’s win was resounding, critics worry that his rise could worsen sectarian tensions betweenIndia’s majority Hindus and its 138 million Muslims.

A Hindu nationalist, Modi remains a divisive figure in the country of 1.2 billion people, in large part because he, as chief minister of Gujarat state, was in command in 2002 when communal rioting there killed more than 1,000 people — most of them Muslims.

Modi was accused of doing little to stop the rampage, though he denies any wrongdoing and has never been charged with a crime. But critics have often questioned whether he can be a truly secular leader in a country with many faiths.

Modi was denied a U.S. visa in 2005 for alleged complicity in the riots, although as prime minister he would be virtually assured a visa.

The Congress party tried to highlight the 2002 riots during the campaign, but Modi’s momentum — and laser focus on the ailing economy — carried him to victory.

The outcome was a crushing defeat for the Congress party, which is deeply entwined with the Nehru-Gandhi political dynasty that has been at the center of Indian politics for most of the country’s post-independence history.

By Friday evening, Modi’s Hindu nationalist Bharatiya Janata Party was winning in enough seats in the lower house of Parliament to exceed the 272-seat majority needed to create a government without forming a coalition with smaller parties, the Election Commission said. Of the 357 seats declared the BJP had won 217 and was leading in another 65.

Full results were expected later in the evening or by Saturday morning, but Modi’s win was all but assured.

The last time any single party won a majority in India was in 1984, when an emotional nation gave the Congress party a staggering victory of more than 400 seats following the assassination of then-Prime Minister Indira Gandhi.

The overwhelming victory gives Modi, a 63-year-old career politician, a strong mandate to govern India at a time of deep social and economic change. India is in the throes of rapid urbanization and globalization just as the youth population skyrockets — with many new voters far less deferential to traditional voting patterns focused on family lineage and caste.

For the young Indian voters, the priorities are jobs and development, which Modi put at the forefront of his campaign.

Although he has focused strongly on the economy, Modi has given some hints of his foreign policy leanings, saying the BJP wants to strengthen India’s strategic partnership with the U.S. and build on the foundations laid by the last BJP prime minister, Atal Bihari Vajpayee.

Vajpayee, who governed from 1998 to 2004, rode a bus across the border to Pakistan in what was seen as a bold step in trying to mend ties with India’s longtime enemy.

The Obama administration has watched Modi’s rise carefully, and in February, for the first time in Modi’s decade-long tenure as the top official in Gujarat state, the U.S. ambassador met with him.

The election came at a low ebb for the Congress party, which has been in power for all but 10 years of the country’s history since independence in 1947. The party has been plagued by repeated corruption scandals and a poor economy.

Friday’s partial results showed Congress winning only about 45 seats, its worst showing ever.

The leader of the Congress campaign, 43-year-old Rahul Gandhi, failed to inspire public confidence. He was seen as ambivalent at best over winning a job held previously by his father, grandmother and great-grandfather.

“I wish the new government all the best,” Gandhi told reporters Friday afternoon, adding that he held himself responsible for the party’s losses.

Immediately after his appearance, his mother, Sonia Gandhi, the president of the party, took the microphone and said she assumes responsibility.

The two took no questions after their brief remarks and Rahul trailed his mother off the stage.

Rahul Gandhi, who first won a seat in Parliament in 2004, has been viewed as prime-minister-in-waiting for his entire political career, though he never appeared comfortable in the role. When he finally gave the first television interview of his political career earlier this year it made for dull, uninspiring viewing full of vague promises.

In sharp contrast, Modi was quick to publicly mock the Gandhi scion, often referring to the Congress as a “mother-son” government and hammering away at the perception that Gandhi was nothing more than a feudal prince from a family that views ruling the country as its birthright.

There was a record turnout in the election, with 66.38 percent of India’s 814 million eligible voters casting ballots during the six-week contest, which began April 7 and was held in stages across the country. Turnout in the 2009 general election was 58.13 percent.

“In the history of independent India, no political party has defeated the Congress party with such a wide margin,” BJP President Rajnath Singh told a news conference that opened with the blowing of a conch shell, a traditional start to most Hindu rituals.

Sreeram Chaulia, a political analyst and dean of the Jindal School of International Affairs, said the BJP’s image as a purely capitalist, pro-business party resonated across India. That image contrasts with Congress, which is considered more of a welfare party, mixing capitalist reforms with handouts for the poor.

“A lot of ordinary people believed in (Modi’s) message and wanted to give him the strong mandate he was seeking, to see if he could really change things in India,” Chaulia said. “There has been growth in the middle class, so of course why have they punished the incumbents? Because they want more, obviously, something more than subsistence. They want upward mobility.”

At one point Friday, the benchmark Sensex stock index rose as much as 6.1 percent on news of the BJP’s strong showing before closing 0.9 percent higher than Thursday.

In sharp contrast to the street parties outside the BJP office, a sober scene played out in front of the Congress headquarters, where few showed up despite barricades erected to protect supporters from passing road traffic.

“I admit that in 2014, the result is worse than our worst-case scenario,” he said. “But the Congress party has a deep reservoir of strength.”

But Modi promised a fresh start in India on Friday, noting that he is the first Indian prime minister born after independence from Britain.

“I would like to reassure the nation that while we did not get to fight and die for independence, we have the honor of living for this nation,” Modi said. “Now is not the time to die for the nation but to live for it.”