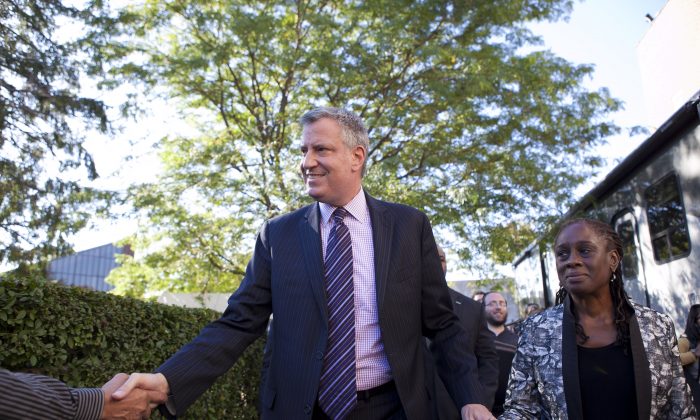 NEW YORK—Exactly a year ago on October 4, Public Advocate Bill de Blasio, who at the time was planning a run for mayor, gave a speech in front of a few hundred guests at an Association for a Better New York (ABNY) breakfast in midtown Manhattan. He pitched an idea to help mend education in the city: a tax hike to pay for universal pre-kindergarten and after-school programs.

The speech was panned. He was too radical, critics said, his ideas too bold and too progressive. The city’s wealthy, a critical component to fundraising in a campaign, would never support anyone raising their taxes.

As a penance, de Blasio, who formally announced his bid for mayor in January of 2013, spent the better part of the first six months of his campaign wading in uncertainty, barely cracking 10 percent in the polls.

Now, de Blasio has a commanding lead in the polls, with the October 3 Quinnipiac poll showing him with a 50 point lead over his Republican rival Joe Lhota.

De Blasio has the unabashed support of the leading Democrats, including President Barack Obama. Even some of those wealthy business owners have come around.

On Friday morning, a year to the date, de Blasio went back to midtown to speak at the ABNY breakfast. This time the room was double the size with a crowd of nearly 750.

The mayoral hopeful was jovial, light, and joked often—a stark contrast to his speech the year before. The crowd, who had sat quietly in 2012, now laughed, joked, applauded, and showed support.

In the speech, De Blasio hammered home his campaign message: curing the city of its income inequality by reforming education and police practices, and providing affordable housing.

“I believe we must guarantee every child in our city a quality pre-kindergarten education and every middle school student a safe after-school environment that keeps them on task, off the streets, and out of harm’s way,” de Blasio said. “And I strongly believe we must back up our commitment with real dollars —a modest tax on those earning more than a half-million dollars a year.”

Unlike the 2012 speech, no one balked at the idea. If poll numbers are any indication, it seems the city has become comfortable with the idea.

“Look, I know not everyone in this room agrees with every part of my plan,” de Blasio said. “But I know we all share a set of values—that every child deserves a first rate education; that everyone who works hard and plays by the rules should be able to earn a wage that can support a family; that people should be able to live in the same neighborhoods they have spent their lives.”