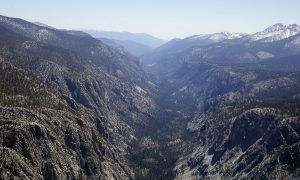 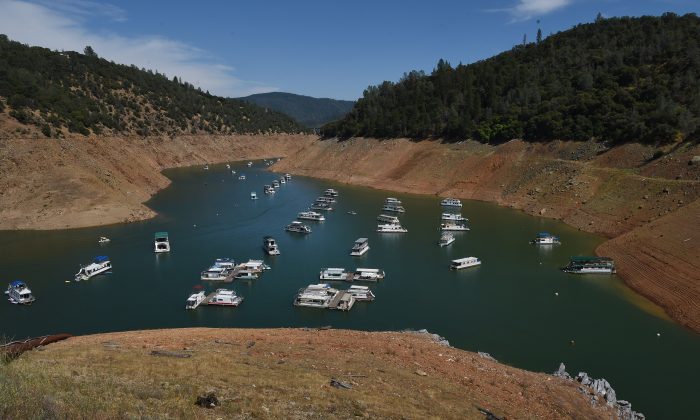 Houseboats are moored on a shrinking arm of the Oroville Lake reservoir which is now at less than 25 percent capacity as a severe drought continues to affect California on May 24, 2015. (Mark Ralston/AFP/Getty Images)
US

FIREBAUGH, Calif.—More than $320 million that was supposed to be rushed to drought-stricken California communities sits unspent in government bank accounts more than a year after lawmakers voted to use the money to provide water, protect wells from contamination and upgrade outdated water systems.

Although millions of dollars from the same drought-assistance package have helped parched communities across the state, the amount of money that remains untapped shows how slowly the wheels of government can turn even in a crisis.

State officials acknowledge the slow pace of the spending, which they say is meant to ensure that the money is used wisely. But some say they would like to find ways to speed up the process.

Weeks after he declared a state of emergency, Gov. Jerry Brown’s administration set aside $687 million to help house farmworkers and others struggling in drought-devastated counties. Nearly half of it has not been awarded or spent, according to figures provided to The Associated Press by the state Finance Department.

The package included some $239 million intended for local water systems such as pipelines and water-treatment plants. Those projects will not be awarded until fall, which is considered on schedule even though lawmakers called the projects “shovel-ready.”

“A term like ‘shovel-ready’ implies that this is going to start happening” immediately or the next day, “when in reality, it’s going to be many months,” said Steve Boilard, a former nonpartisan policy analyst who leads the Center for California Studies at Sacramento State University. “The issue is not that this is taking longer than it should. It’s taking longer than the voters have been led to expect.”

Administration officials defend their handling of the money.

The Brown administration’s efforts have made a difference to city dwellers, farmers and wildlife hurt by the driest conditions in recent memory. Eleven new wells are tapping more underground water for Los Angeles. Slow-trickling valves have replaced sprinklers on 200 acres of farmland near Santa Maria. A vanishing pond near Sacramento has been replenished, protecting a popular breeding ground for the threatened giant garter snake.

But large chunks of the money were slow to reach Californians hit hardest by the drought.

The state set aside $21 million for housing assistance. Of that, $10 million in state money was spent, but only a fraction of $11 million from federal housing grants was tapped.

Instead, millions of unspent dollars were rolled back into general housing programs, said Evan Gerberding, a spokeswoman for the California Department of Housing and Community Development.

Only small, low-income communities were eligible to apply for the federal money. Many of those towns, she said, are often unable to manage money that must be turned around quickly, or they do not see it as their role.

The administration took more than a year to nearly exhaust $25 million for food banks in counties dealing with drought-related job losses.

Michael Weston, a spokesman for the state Department of Social Services, said the funding was spread out in installments, rather than buying all the food at once. To date, more than 650,000 boxes of food have been provided to people such as Fidel Fraga, 63, who was laid off three months ago from his job driving a tractor at a farm that grows tomatoes, cotton and almonds.

Every two weeks, Fraga and hundreds of other unemployed farmworkers gather at a park in Firebaugh, a Central Valley town 50 miles from Fresno. They line up to get a numbered ticket marking their place in line and wait for trucks to deliver boxes of rice, oatmeal and canned vegetables. Some people collect one box. Those with large families receive several boxes.

“I’d prefer to be working than asking for food,” Fraga said in Spanish.

When the trucks arrive, he serves as a volunteer, lifting the 30-pound boxes into the back of pickups belonging to other jobless farmworkers. When his turn comes, Fraga stops and collects his own food that will help feed him and his family.

Last year, the state government offered help to communities looking to boost water supplies by accelerating the spending of $472 million that was approved by voters for water projects in 2006.

About half that money was awarded by the Department of Water Resources last fall, but some of those projects have yet to see construction begin because local governments are still looking for the best deals and securing other sources of funding.

The state takes time for a reason. If officials are too quick to spend, they risk paying for shoddy work by unqualified companies and inflicting unintentional environment damage.

Still, some say the urgency of the drought demands quicker action. Democrats in the state Senate called on the governor’s administration to get water-use efficiency projects started in months rather than years.

At a Senate oversight hearing, Mark Cowin, director of the Department of Water Resources, conceded that his agency could do more to get money out the door, including drafting guidelines for grants faster.

Brown acknowledged the government’s slow pace in March when announcing the latest round of emergency drought spending.

“It’s just the nature of the beast,” the governor said, “that things don’t go as fast as the system seems to want.”

This story has been corrected to show that more than $320 million in drought relief is unspent, not more than $340 million.