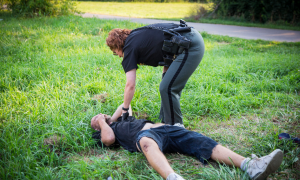 Reining in the Opioid Crisis
0 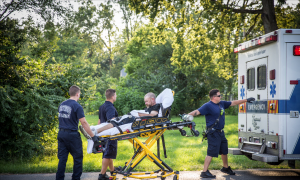 A Year in Hope: How Viral Photo of Mom Overdosing Led to Recovery

A year ago, a photo of an overdosing mother that went viral became a graphic symbol of America’s opioid epidemic.

Exactly one year on, however, and that same photo no longer marks the end of another tragic story, but the start of a new story—of hope.

The photograph of Erika Hurt slumped unconscious in the driver’s seat, syringe in hand, shocked her so much when she saw it, that it marked a turning point in her life, she said.

The image had been publicly released by the police to highlight the raw dangers of opioid addictions when they found Hurt had overdosed, with her baby son in the back of a car in Bartholomew County, Indiana.

But it was the subject of the photograph—herself—who got a big awakening when she saw the picture on the evening news.

“They exposed me and my addiction to the whole world,” Hurt, 26, told NBC. “I thought it was terrible.”

A year later, and she is celebrating one year clean.

In a Facebook post exactly one year after the photo on Oct. 22, she wrote: “Little did I know that day, my life was about to change, drastically. Today, I am able to focus on the good that came from that picture.”

The photograph was taken in the town of Hope, by a police officer on Oct 22. 2016, just before medics revived Hurt from her near-fatal heroine overdose with a shot of Narcan. Hope Town Marshal Matt Tallent, released the image to local media.

Hurt had been taken to a hospital and then onto Bartholomew County Jail.

In the meantime, the photograph had gone viral.

When the evening news came on, Hurt saw the shocking image of herself for the first time.

Tallent told NBC he had never meant to embarrass Hurt, or shame her into changing. With fatal drug overdoses doubling that year, he had wanted the image to serve as a warning of heroin’s dangers.

He said it was unclear whether the photograph had had any impact on the local drug problem, but he believes it saved Hurt.

“For this girl to have her life ripped up and then come back and be sober after everything that’s happened to her, that’s a story of success,” Tallent said.

“I was so hurt and embarrassed. I had no clue that the picture had even been taken,” Hurt told NBC. “But at the same time, it was kind of a really big eye-opener to see myself like that.”

Having pleaded guilty to neglect she was given a two-year suspended jail sentence that required her to go to an inpatient drug rehab program in jail.

With the end of the program, Hurt was allowed to live at her mother’s under house arrest, and found a job in a plastic molding plant.

Hurt was prescribed painkillers when she was 15, got hooked, and progressed to heroin.

She managed to stop when she got pregnant, according to NBC, and stayed clean through the December 2015 birth of her son, Parker.

Hurt said that she did not tackle her recovery alone.

“I have a very large group of supporters standing behind me each and every day to help make sobriety possible for me!” she wrote on Facebook.

Her Facebook feed is now full of images of a healthy and happy mother and son.

Hurt said that she seriously debated for a month before whether to repost the painful picture that “displayed the absolute worst moment of my life.”

“I’ve decided to repost the picture simply because it displays exactly what heroin addiction is. Also because I do not want to ever forget where the road of addiction has taken me.”