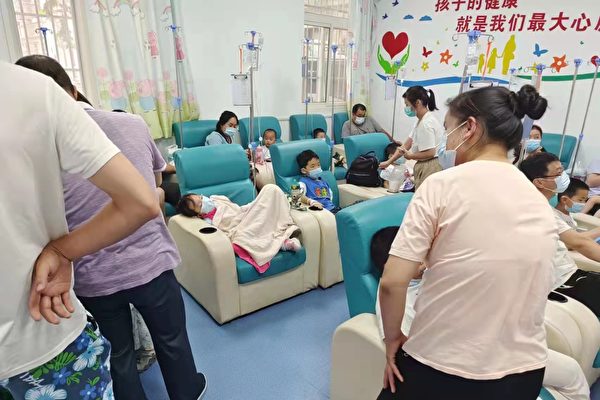 Children from a Kid Castle Educational Institute branch in the local community complex, Vanke Golden Joy Town, in Xi'an City, Shaanxi, are treated for symptoms of foodborne poisoning in the week of June 19, 2022. (Provided by an interviewee)
Social Issues

Nearly 200 children attending a kindergarten in Xi’an suffered symptoms of foodborne poisoning. Some were hospitalized for nearly a week.

The children had similar symptoms of high fever, nausea, vomiting, and diarrhea that persisted for many days. Local authorities’ suspected it was Salmonella contamination that caused the illness.

Parents who talked to the Chinese edition of The Epoch Times on June 23 accused the kindergarten of destroying any evidence by disinfecting the facility.

One parent said that more than 500 children attend the institute. Nearly 200 of them developed symptoms of food poisoning on June 17 and were taken to hospital. Some were still hospitalized as of June 23.

One father, Chen Yunming, said that many children started showing similar symptoms on June 18. Members of a parents’ chat group were alerted when they realized that so many of their children were sick at home at the same time.

Yang Ping, a mother, said that her child has had a fever since the 18th, along with diarrhea and vomiting. “I had to take my baby’s temperature every half hour throughout the night to make sure her temperature was going down. This morning my baby started coughing.”

His child’s fever started at 3 a.m. on Saturday, the doctor at the children’s hospital said it was an upper respiratory tract infection; at noon, they went to hospital Emergency department because the child had stomach pain and diarrhea, the doctor diagnosed it as acute gastroenteritis.

Yang said that 15 children in her child’s class of 33 were sick on the 19th, while many more new cases were reported on the 22nd. Parents discerned that 180 children had the same symptoms.

In severe cases, some children had bloody stools and even went into a coma. Two parents reported their child had a fever of 103.6 F and 105.8 F respectively.

Some children were seriously ill, but “It took three to four hours just to wait outside the E.R.,” said Wu.

Local media also reported this incident. According to Chinese news, one child had 49 bowel movements in about four days.

On the evening of June 19, the angry parents visited the institute and found the staff of the local education bureau also inside the facility.

Yang said, “I wanted to know what they had fed my baby. It’s an expensive kindergarten, $4,500 a year. But, what have they done to my child?”

The parents again tried to get an answer from the institute on the 22nd. But the facility claimed that diarrhea was caused by heat stroke.

Yang said that the neighborhood saw what the institute was doing. She said that they destroyed all evidence in the dining hall.

“But all the sick children are the evidence,” Yang said.

Chen also said that the institute had already disinfected the facility on Friday and Saturday. The sanitary conditions at the facility were also changed after the incident.

Hard to Get An Answer

According to the parents, the affected children ranged from preschool, pre-kindergarten, and kindergarten levels.

It was reported that the authorities’ examination found a correlation between the symptoms and the lab tests, and believe it was an infection of Salmonella.

After the incident, the institute was closed for rest of the week.

On June 23, The Epoch Times called the institute. The staff member who answered the phone claimed to be a new hire who knew nothing about the situation, and said that the institute was awaiting official notification from the authorities.

According to a Tianyachan.com report, the institute was founded on Jan. 31, 2018, as a private non-enterprise entity, that is, a people run business not for profit. The registration of the institute expired on May 30, 2022.

Chinese media also reported that there are surveillance cameras inside the facility, but the videos are not available to the parents.

Interviewees have been given pseudonyms to prevent reprisal from the Chinese regime.

Gu Qinger and Gu Xiaohua contributed to this report.