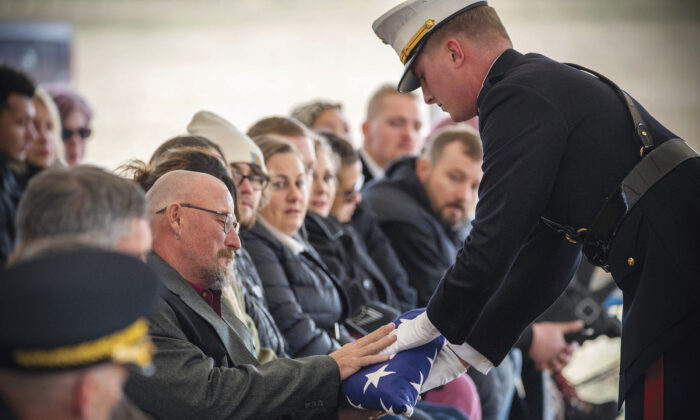 A U.S. Marine with the Golf Company, 1st Marines presents Jim McCollum with a folded American flag during memorial services for his son, Lance Cpl. Rylee McCollum at the Gill Ranch in Jackson, Wyo., on Oct. 23, 2021. (Bradly J. Boner/Jackson Hole News & Guide via AP)
US News

A Wyoming Farewell for Marine Killed in Afghanistan Bombing

JACKSON, Wyo.—Dozens of U.S. fellow Marines joined hundreds of Wyoming residents to bid a final farewell at a memorial for Rylee McCollum, one of 13 U.S. servicemen killed in a suicide bombing as they guarded a gate at a chaotic Kabul, Afghanistan airport during the final U.S. evacuation from that country.

Many of the Marines were members of the 20-year-old McCollum’s unit serving in Afghanistan when he was killed on Aug. 26. McCollum, a Marine lance corporal, grew up, went to school, and enlisted for the Corps in the mountain valley area known as Jackson Hole, home to the town of Jackson. He was honored during Saturday’s Jackson service attended by more than 400 people.

McCollum was a dedicated Marine, enthusiastic and funny, said Cpl. Wyatt Wilson. When something had to be done, Wilson told the Jackson gathering, “I always grabbed Rylee because I knew it would be done right the first time,” the Jackson Hole News & Guide reported.

Ten other Marines, a U.S. Army soldier, and a Navy corpsman also died in the explosion as they guarded a gate at Hamid Karzai International Airport. Twenty other service members were wounded, and dozens of civilians were killed.

Mourners remembered McCollum as a “roly-poly” boy who became a dominant high school wrestler, a young man who always told people he wanted to become a U.S. Marine.

Wyoming Gov. Mark Gordon, who attended with U.S. Sen. John Barrasso, said Americans “should rejoice that heroes like Rylee are born.” Gordon ordered U.S. flags in the state to be flown at half-staff to honor McCollum, who died in his first deployment.

McCollum died almost 20 years after the death of another Wyoming soldier drew national attention. Army Ranger Spc. Jonn Edmunds, 20, of Cheyenne, was one of the war’s first two casualties when a Black Hawk helicopter crashed Oct. 19, 2001, during a search-and-rescue mission.