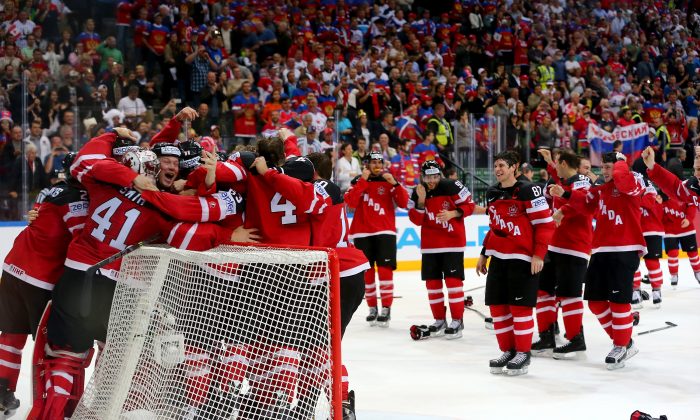 A World Hockey Championship Worth Celebrating

Canada captured its 25th IIHF Ice Hockey World Championship gold by thumping Russia 6–1 in the tournament’s final game this past Sunday. It was an outstanding performance by Canada in a tourney they dominated from start to finish and one in which they banished many demons.

Canada ran the table, winning all 10 of its games in regulation, outscoring the opposition 66–15. The top three scorers in the tournament, Jason Spezza, Jordan Eberle, and Taylor Hall, were all Canadians.

Whenever Canada doesn’t place well at the Worlds, Canadians generally shrug it off and make excuses like their best players weren’t there, the size of the ice surface favours Europeans, or the Stanley Cup means more to them.

But with no Canadian NHL teams reaching the Conference Finals and the Stanley Cup drought for Canadian teams now stretched to 22 years (Montreal 1993), it seems more Canadians paid attention to this tournament.

Sidney Crosby’s presence helped and while he was very good, he wasn’t the dominant force many thought he had to be for Canada to be successful.

Television ratings for the final were huge. TSN reported that a record breaking 1.5 million viewers tuned in which was up 11 percent from the previous record set back in 2005.

But there weren’t the wild celebrations seen in packed bars and house parties like when Canada won Olympic gold or the world juniors. It felt like Canadians were saying “good job,” before they resumed their long weekend activities.

Are the World Championships a Big Deal?

In Europe, the World Championships is the last major event on the hockey calendar. It is treated with reverence and the tournament is a massive deal across the Atlantic.

It’s a big deal for Alexander Ovechkin who flew to Prague to join Team Russia after his Washington Capitals were eliminated from the Stanley Cup playoffs. Ovechkin played Game 7 at Madison Square Garden on a Wednesday night and made it for Saturday’s semifinal against Team USA.

By contrast, Drew Doughty and John Tavares chose to stay home. Tavares’ Stanley Cup dream ended in the first round when his New York Islanders were eliminated, while Doughty and his Los Angeles Kings didn’t even qualify for the playoffs.

It is safe to assume that the Stanley Cup still holds a bigger place in most Canadian hearts. In most street hockey games or even backyard shinny affairs, kids dream of scoring the overtime winner in Game 7 of the Stanley Cup Finals, not winning the gold medal game of the World Championships.

Yet, this World Championships result should be a big deal. In fact, what Canada accomplished at this tournament is truly remarkable.

Think about it. Getting together a bunch of very good to great players together who had their NHL seasons ended in disappointment. Most of them just wanted to heal their wounds, be it physical or emotional. Some have young families that they seen sparingly for months and they want to reconnect with their loved ones.

Yet, they chose to represent their country and fly overseas to where they are enemy No. 1. Most of these players have never played together. Some are even bitter rivals (Sidney Crosby and Claude Giroux.) Yet, after a few days of practice, Canada dominated the tournament.

Players accepted their roles and worked for the collective good. Crosby and Giroux set aside whatever personal differences they had in order for this team to be successful.

Winning all ten games including the thrashing of Russia in the gold medal game is astounding. Perhaps the most impressive part was defeating the host Czechs not once, but twice in front of their rabid supporters.

This tournament didn’t produce a moment like Paul Henderson’s goal in 1972, or Mario Lemieux’s winner in the 1987 Canada Cup, or Crosby’s golden goal in the 2010 Olympics.

But what it did produce was a team that did everything one could ask for. They played with skill, discipline and a steely-eyed will to win. It’s what Canadian hockey is all about.

Jeremy Wiebe has written for The Hockey Writers and other web sites. Currently residing in Winnipeg, his Twitter is @jstar1973