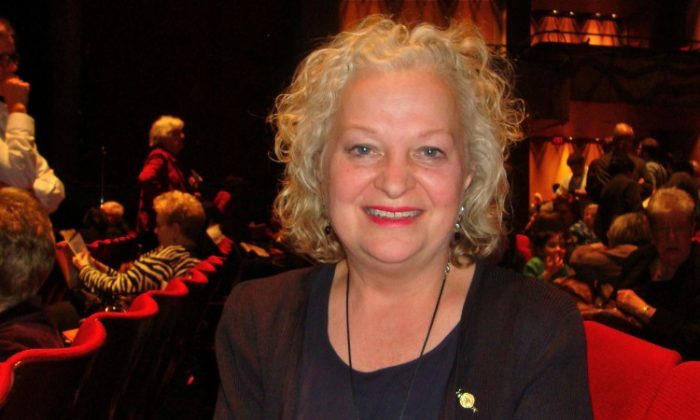 INDIANAPOLIS—”I had high expectations, I expected it to be wonderful and I think it is wonderful, it’s a beautiful show!” enthused Ms. Jane Gehihausen. The Director of International and Cultural Affairs, City of Indianapolis, caught the opening performance of Shen Yun Performing Arts Touring Company as it graced the stage of Clowes Memorial Hall of Butler University Tuesday evening, March 13.

She appreciated Shen Yun’s mission of reviving 5,000 years of divinely inspired traditional Chinese culture through classical Chinese dance, original orchestral music and award-winning solo vocalists. “It’s a wonderful way to show Chinese culture which is very important to our city—and to the people in Indianapolis about China,” she said.

Ms. Gehihausen had high praise for the various aspects of the show. “Very beautiful costumes, the choreography is really wonderful and I think the history [Shen Yun] are sharing about China is very interesting as well.”

Within classical Chinese dance lies China’s deep cultural traditions, allowing its movements to be richly expressive, such that the personalities and feelings of characters can be portrayed with unparalleled clarity.

Ms. Gehihausen was touched by the depth of classical Chinese culture that Shen Yun’s artists share with the world. “What impresses me the most is actually the combination of the dance and the costumes because, [through] the dance, they were explaining, Chinese traditional dance is very unique … a lot of movement so that’s really amazing, what the performers can do. The costumes are really, just very, top end and very colorful.”

She enjoyed the unique animated backdrops that are coordinated to the dancers’ movements. “I also really liked the stage background … I love how the technology of the people in the background on the screen and how they pop up on the stage. That’s definitely my favorite part!”

In conclusion, she said she would recommend it to her colleagues. “I would highly recommend it. I really think it’s a wonderful show and I’m really glad [Shen Yun are] here in Indianapolis!”