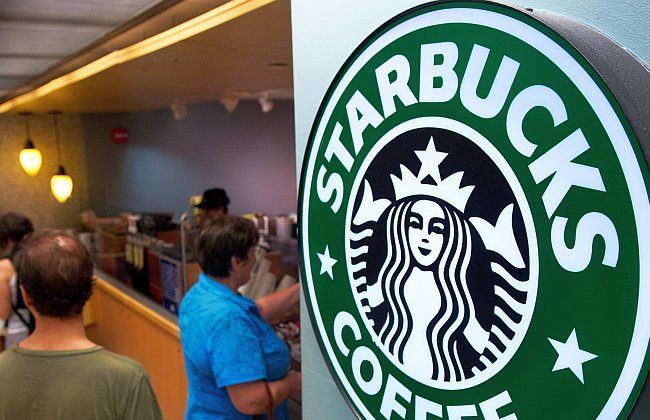 Customers line up for coffee at a Starbucks inside Dulles Airport near Washington, August 2011. (Paul J. Richards/AFP/Getty Images)
Opinion

Despite its reputation for global consciousness and socially aware customers, Starbucks is actually a huge ally of the NRA by welcoming lethal weapons in its stores. By refusing to ban guns from its premises as it is allowed to as a property owner, Starbucks facilitates gun proliferation and the gun lobby’s stated goal of universal armament of citizens at all times in all venues.

While forward-thinking corporations like California Pizza Kitchen, Peet’s, IKEA and Disney banned guns from their premises when presented with a petition from the Brady Campaign with 33,000 signatures over a year ago, Starbucks refused. Among the guns Starbucks openly welcomes into its coffee shops are the FN Herstal 57 (which enabled the Fort Hood shooter to fire 100 bullets in 10 minutes, killing 13 and wounding 30), the Glock 19 used by Jared Loughner against Rep. Gabby Giffords and the AR-15 of Aurora and Newtown fame. Thank you, Starbucks.

In response to a 2012 campaign called the Brew Not Bullets Boycott, Starbucks said, “We believe that supporting local laws is the right way for us to ensure a safe environment for both our partners [employees] and customers.” But “local laws” clearly allow businesses to prohibit firearms on their property and other companies are clearly doing it. Worse, Starbucks admits the risk to its employees and customers by banning guns at its Starbucks’ corporate headquarters. Why should only senior management be protected? Gunshot accidents have already been reported in Starbucks stores.

[topic]Starbucks’ stance has earned it unexpected support from gun lovers, though they are not its traditional customers. Starbucks is “a Seattle-based, trendy, slightly artsy-crafty chain to begin with, but they have correctly assessed that they’re now in middle America and they don’t want to offend the sensibilities of middle America in order to pacify a few left-leaning gun-control supporters,” said Paul Valone, director of Grass Roots North Carolina about the boycott, according to the Christian Science Monitor.

But most see the opposite situation–a few, fear-based extremists obsessed with amassing more and bigger weapons and creating a society in which everyone is armed. “If you’re someone who is feeling the need to tote around a gun everywhere, ask yourself, ‘What it is you’re so afraid of,’ not, ‘Which other pointless location can I suddenly feel the need to be armed?'” wrote Christian Science Monitor reader Lynn Gleason.

According to Elliot Fineman, CEO of the National Gun Victims Action Council (NGAC), we are at the “secondhand smoke” moment in the gun debate–the moment when people realized that smokers endangered everyone not just themselves and they were no longer tolerated. When corporations and consumers stood up to Big Tobacco and banned smoking in stores, restaurants and public spaces, laws soon followed.

Like second-hand smoke, the public is now beginning to see that gun proliferation is a constant threat to children and innocent bystanders that is getting worse through the aggression of gun rights’ activists and lawmakers’ inaction. An estimated 100 million people want sane guns laws and only one million do not, says Fineman. That means that consumers have the numbers to move both corporations and lawmakers and force sane laws simply by voting with their wallets.

Note: The views expressed in this article are the author’s own and are not necessarily representative of Epoch Times.