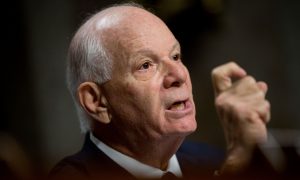 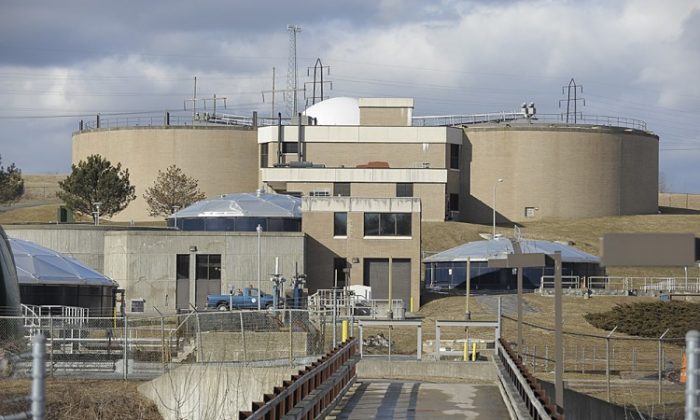 Methane gas storage tanks. By 2006, the plant produced 40 percent of its own power. (Courtesy of ARCADIS)
US

NEW YORK—A wastewater treatment plant in New York state has become the first in the United States to reach the capability of energy-independence. The plant is almost entirely powered by methane gas derived from its own wastewater and therefore hardly imports energy.

The Gloversville-Johnstown Joint Wastewater Treatment Facility near Albany serves as an economically viable example for solutions to the growing problem of reducing air pollution and improving energy security. Technologies called anaerobic digestion and combined heat and power make it possible for wastewater plants to turn sewage into fuel, and in turn save energy, and even pay for itself.

“Every community that has the environmental liability of a wastewater treatment plant can utilize this liability for its own advantage and turn it into asset,” said Robert Ostapczuk, from ARCADIS, an international engineering consultancy company.

In April, ARCADIS won several design awards for its work on the plant from organizations such as the American Council of Engineering Companies and the American Academy of Environmental Engineers.

The cities of Gloversville and Johnstown in Fulton County have jointly run a mid-sized treatment plant to take care of their sewage and wastewater for four decades.

In the early 1990s, the plant struggled to maintain operations because the volume of incoming waste from nearby factories dropped, while energy, debit service and personnel costs soared.

These circumstances spurred significant changes at Gloversville-Johnstown. First, the plant initiated big conservation projects at the facility leading to a more efficient use of energy and sizeable cost savings.

More significant was the introduction of an anaerobic digester as well as combined heat and power technologies at the plant.

Anaerobic digestion is a process involving microorganisms that break down organic matter without gaseous oxygen, usually in large tanks. Final products of the digestion process are biogas, a renewable energy resource, mostly made up of methane, water, and carbon dioxide. The biogas is stored and then used as a fuel to generate heat and electricity via a gas-powered engine in a process called combined heat and power.

Gradual upgrades to these technologies at total cost of $11.5 million were followed by an ambitious plan to produce 100 percent of the operating energy on site. Besides the building of a 50,000-cubic-foot biogas holder, equipped with an expanding and contracting “inner lung,” two 350-kilowatt biogas generators replaced smaller ones.

While for many years half of the biogas was lost, for the last three months the generators averaged 95–98 percent in power generation, up from 12 percent in the late 1990s. And in 2011, the plant reached its goal of becoming energy independent, as the first of its kind in the United States, though only potentially. Due to the regulatory situation in New York state, the plant is not allowed to sell excess power to the grid through net metering. If it did sell, the energy it gave out would offset the peak times when it has to purchase some power.

Nonetheless, Gloversville-Johnstown is able to “produce 110 percent of its own electricity on site,” said Robert Ostapczuk. As the senior project engineer, Ostapczuk was mainly responsible for the upgrades in the last 12 years.

As a result of these measures, the facility generated 5 million kilowatt hours of electricity in 2011, while saving almost $330,000 on its electricity bill. The costs for purchased electricity were at an all-time low last year, according to the annual report.

Additional revenue comes in from increasingly taking on yogurt and cheese whey, which is basically the waste product leftover after making cheese. Gloversville-Johnstown made almost $450,000 in 2011 just from one big dairy plant.

“There is a growing interest nationally in that configuration at wastewater treatment facilities,” said David Terry, executive director the Association of State Energy Research & Technology Transfer Institutions, who wrote a case study on the plant.

Besides its economic advantages, there are outstanding environmental benefits to this technology as well.

A higher rate of recycled waste puts less stress on the local environment since less sludge is sent to landfills. Plus, it is a local renewable resource with lower carbon emissions. Anaerobic digestion and combined heat and power are considered to be one of the most useful decentralized sources of energy by the United Nations Environmental Program.

“It’s all there. It’s just a matter of having the right person wanting to do it in each community,” said Ostapczuk.

Besides technological upgrades and improvements, “it takes a change of culture … of managing waste water,” said Ostapczuk. “It is just a matter of being willing to take risks and expand what you treat, how you treat it, and run the plant like a business.”