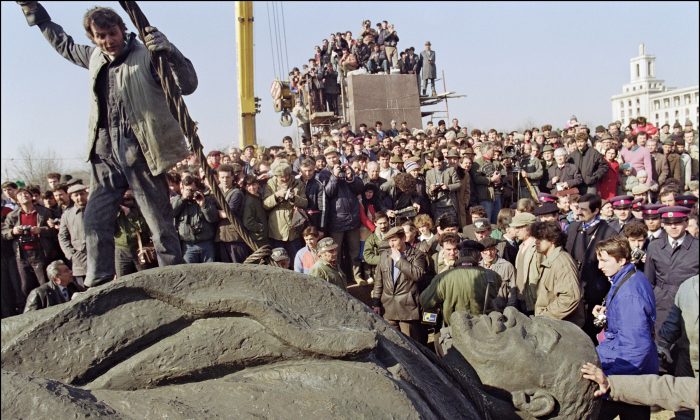 A Romanian worker stands atop the statue, sculptured in a pure style of socialist realism, of Russian Bolshevik revolutionary leader Vladimir Ilyich Lenin after it was removed from its pedestal on March 5, 1990, in Bucharest. Romanian communist dictator Nicolae Ceausescu and his wife Elena were executed by firing squad on Dec. 25, 1989, in Bucharest after being found guilty by an army tribunal of 'crimes against the people'. (Andre Durand/AFP/Getty Images)
Viewpoints

A Warm Day Brings Back Memories of Summers Under Communism

It’s already July and, judging by the hot breeze so early in the morning, it’s going to be another scorching day. A young deer came out of the woods and is grazing on the green grass in the backyard, unafraid of the human sitting on the deck and watching her.

The heat swirls in my mind memories of hot summers in my childhood under Nicolae Ceausescu’s communist regime in Romania, when we could seldom afford to go to the pool and certainly not unaccompanied by a parent. The bus fare and the long ride to the outskirts of town were prohibitive for “proletarians.”

Because the city pool was filled on the first day of the week, it was always best to go on Tuesday, when the water was the cleanest. Since they did not use chlorine, the water became murky and dark green by Sunday.

A city worker once told my dad—and I listened carefully, with the morbid curiosity of any child my age—that they found horrible things at the bottom of the large and deep pool, most unmentionable, like the occasional dead body of a poor soul who had drowned and remained trapped on the bottom until they had emptied the pool on Monday.

I was convinced that I never learned to swim back then because the pool was so disgusting, not because my parents could not afford the lessons. It was too gross to put my face in that kind of water. And going to the Black Sea was not any better, as the water was mostly murky black and full of algae, hence the name.

But kids trapped in the city’s hot summer in communist Romania could at least get a tan, although there were no sunglasses and no tanning lotion or sunscreen. Nobody knew about skin cancer and cataracts. Even if we had known, we were too poor to afford protection.

There was a hatch at the top of a metal ladder on the fifth floor of our apartment complex; it was never locked, and we would climb out onto the tarred roof with mom’s best bedspread and lay on it to fry. There were no sprinklers to cool off in, no water fountains, and no fire hydrants—just a water bucket and a glass.

Summers were hot and filled with a lot of reading to do. The literature list teachers gave us every June was long, and we had three months to finish. Our local library was located in a beautiful building that has now lost its original luster; the large book collection has been downsized to one room. Since the “fall” of communism, it has been used for parties and other city events.

I spent most summers with my grandparents in the country. It was fun to make mud pies, bathe in the irrigation ditches, go fishing for minnows and leeches, or, if we had the energy to walk that far, go to the crystal-clear river, where we could bathe with the large fish trapped in swim holes.

My youngest aunt would go with us sometimes as a chaperone, but she could not swim, either. It was not until I attended college in the United States in my early 20s that I learned to swim, in the pool where my children also learned to swim as toddlers.

Today, even the gorgeous creek that used to run through the middle of the village has been rerouted and the venerable trees on the banks cut down. We spent so many summers there fishing with a net made from grandma’s good stockings. We caught a lot of leeches and minnows, which we placed in glass jars with lids, but the leeches always crawled out and disappeared.

We had a healthy fear of deeper water, as several children and adults we knew had drowned because they could not swim or their legs got trapped in underwater vegetation. Lake Snagov, off-limits to the poor “proletariat” but the playground of the communist elite, had claimed many lives.

As I grew older, my parents saved enough money for a daylong train ride to Constanta, where my uncle lived. He allowed me to stay in his high-rise apartment, a good bus ride to the beach. They were supposed to feed me, but I only got to eat with them for one meal in the evening. For the rest of the day, I was on a starvation diet, as my parents did not send me with enough money to ride the bus and buy food.

I made a few friends who were luckier and at least we could buy something to drink. Needless to say, we were hungry and dehydrated all day at the beach, but happy to escape the dirty towns from which we came.

We saw and admired the Polish, East German, Hungarian, and Czechoslovakian tourists who, despite living under communism like us, seemed to live much better lives than we did. We could not afford to go visit their countries, nor were we allowed passports and visas. Our dear leader was really off the plantation of human rights.