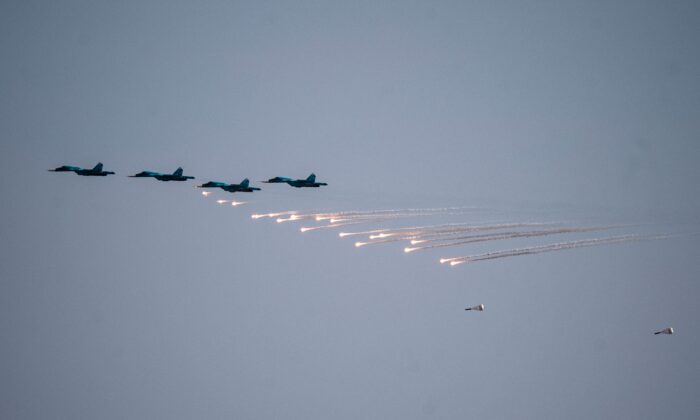 Russian fighter jets drop bombs over the Ashuluk military base in Southern Russia during the "Caucasus-2020" military drills with China and Iran on Sept. 22, 2020. (Mitar Dilkoffl/AFP via Getty Images)
Thinking About China

It is all good that Sweden and Finland want to end their neutrality and join the North Atlantic Treaty Organization, and that President Joe Biden is apparently ready to commit U.S. military forces to the defense of democratic Taiwan.

But as Biden failed to deter Russia’s invasion of Ukraine, he is not committing to a level of rearmament necessary to defend an enlarged NATO and win a war against China and Russia’s combined nuclear and conventional forces.

As Biden was engaged in a May 24 Tokyo meeting of the Quad (Australia, India, Japan, and the United States), Russian President Vladimir Putin and Chinese Communist Party (CCP) leader Xi Jinping gave Biden and the Quad leaders a “combined” nuclear message.

On May 24, four People’s Liberation Army Air Force (PLAAF) Xian H-6K bombers and two Russian Air Force Tupolev Tu-95MS bombers conducted the fourth joint China-Russia bomber exercise since 2019. This time, they flew over the Sea of Japan with a lengthy diversion south of the Miyako Strait to a region east of Taiwan, where they could launch potentially nuclear-armed cruise missiles against Taiwan and U.S. bases on Guam.

PLAAF H-6K bombers are armed with six CJ-20 precision-guided land-attack cruise missiles (LACMs) with a range of 930 miles, which can be armed with a tactical nuclear or non-nuclear warhead. In all, the PLA has about 125 H-6K/J/N bombers that can potentially launch salvos of 750 CJ-20 LACMs.

Russian Tu-95MS bombers, likely flying out of the Ukrainka air base in the Amur Oblast, are the latest 1980s-built versions of a four-engine turboprop bomber that first entered service in 1956, with about 60 in Russian service today.

China and Russia held previous joint bomber exercises in 2019, 2020, and 2021, with the latter exercise featuring a separate Russian bomber sortie that flew to the west, likely simulating nuclear strikes against U.S. bases in Alaska and U.S. Navy strategic nuclear missile submarines based near Seattle.

These China-Russia bomber exercises are perhaps the most visible indicator that Russia intends to support China should it seek to impose a blockade or even invade Taiwan.

When Russia sent forces to participate in large-scale joint force exercises in China in August 2021, the PLA taught Russian troops how to drive PLA Ground Force ZTL-11 wheeled tanks that would be used in a Taiwan invasion.

In addition, these China-Russia bomber exercises are the most visible indicator they are engaged in some level of offensive nuclear coordination.

Joint exercises with nuclear-capable bombers employed to threaten the leaders of the Quad, and an American president traveling abroad at the time, indicate possible Chinese-Russian coordination of other offensive nuclear weapons like intermediate-range and intercontinental-range ballistic missiles.

A Nov. 20, 2020, Russian report by Russian analyst Alexander Korolev noted a Chinese Ministry of Defense observation about the 2017 missile defense exercise: “The main task was ‘to work out joint planning of combat operations when organizing air missile defences, operation and mutual fire support.’”

Would “mutual fire support” include the coordination of nuclear warhead armed intercontinental and theater ballistic and cruise missiles?

Then on Oct. 3, 2019, Putin announced that Russia was helping China develop a strategic missile early warning system. He stated: “This is a very serious thing, which will radically improve the defense capability of the People’s Republic of China.”

The extent of Russian assistance to China’s developing long-range strategic missile warning capability is not clear. However, Russian source reports have noted that Russian radar firms have been hired to develop software. Other reports hint that Russia may have offered technology for very large early warning radar and early warning satellites.

In addition, the November 2020 report notes the added advantages of Russia helping China with missile defense:

“It opens avenues for the integration of China and Russia’s early warning systems. When warning stations in Russia and China are merged into a single complex, this increases the speed with which the two countries can be warned of and intercept a potential missile attack … that integration of the two countries’ early warning systems facilitates further convergence of Russia and China’s defence strategies—resulting in the formation of a common defence policy.”

However, if Russian and Chinese early warning and missile defense capabilities become “merged into a single complex,” it would facilitate their coordination of offensive nuclear operations, possibly including a massive nuclear first strike against the United States.

While the U.S. Intelligence Community has offered the assessment that China could have 1,000 nuclear warheads by 2030, a basic counting of 360 new ICBM silos with 10-warhead capable DF-41 derived ICBMs, plus estimated production of submarine-launched missiles, points to a possible early 2030s capability that could exceed 4,000 warheads.

To this, one would add Russia’s currently acknowledged nearly 1,500 strategic nuclear warheads plus its 2,000 to 10,000 theater nuclear weapons and any growth in Russian nuclear inventories after the 2026 expiry of the extended 2010 U.S.-Russia New START nuclear limitation agreement.

Suppose Biden is serious about defending Taiwan along with U.S. military allies in Asia. In that case, it is crucial that the United States address the threat of a coordinated China-Russia nuclear capability. This is essential for a credible U.S. “extended deterrence” to protect U.S. allies and prevent China and Russia from starting a war over Taiwan.

Washington should abandon New START now and replace warheads reduced from U.S. strategic missiles due to this treaty, which would increase U.S. warheads closer to 3,000.

Then the United States should increase its strategic nuclear warhead levels and arm some proportion of new U.S. theater range, medium, and intermediate-range ballistic and cruise missiles with tactical nuclear warheads.

A combined China-Russia coordinated nuclear defensive and offensive capability would pose the greatest threat ever to the United States and its allied democracies. Accordingly, it is imperative to prepare for a rapid and decisive American nuclear buildup to sustain deterrence.