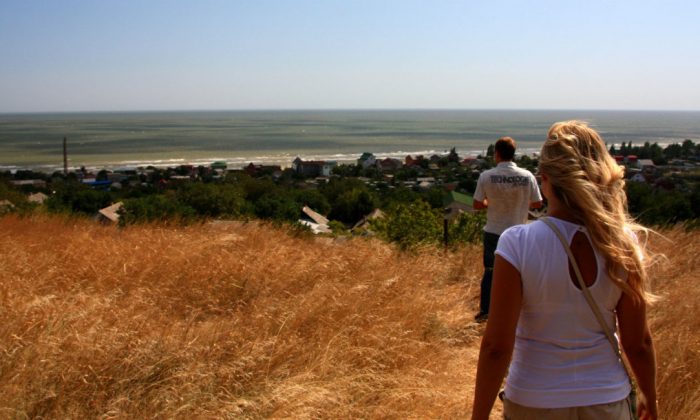 On a bluff overlooking the Sea of Azov outside of Mariupol. (Nolan Peterson/The Daily Signal)
Opinion

A War on Their Doorstep, Ukrainian Millennials Enjoy a Night Out in a Front-Line City

KYIV, Ukraine—In Mariupol, a Ukrainian port city on the Sea of Azov only about 10 miles from the front lines, you can frequently hear artillery exploding from inside the city.

I was at dinner with a group of young people from the city. I had met some of them earlier in the day when I gave a talk about journalism to a university class, and they had invited me to hang out with their friends that night.

We had burgers and beer at a restaurant called Sito Piano, which was on the ground floor of Mariupol’s City Hall. The rest of the building was still a burnt-out carcass—torched when pro-Russian separatists briefly took over the city in April 2014 in the opening days of the war.

After dinner, feeling happy from the good food, beer, and company, the six of us took a taxi to a nightclub. Through the window of the taxi I watched the nighttime streets stream by. I had a flashing moment of self-awareness, realizing, as I so often do in Ukraine, the uniqueness of the moment I was in.

As an outsider, I focused on the details.

The way grass grew over the curbs in some places. The crumbling old Stalinkas (buildings of a neoclassical style of architecture prevalent in the Soviet Union in the 1930s) juxtaposed next to the bleak, cubical Khrushchyovkas (the drab, typical “Soviet-style” apartment blocks built during the 1960s). The rusting playgrounds that looked like medieval torture compounds; Ukrainians do not share Americans’ pathological obsession with safety standards.

The big looping strides of women who wore high heels whenever and wherever they went out. The jean shorts and satchels preferred by the men. Those are the images that stick in your mind like lingering sunspots when you’re getting to know a foreign country.

The Ukrainian flags tied to street poles were part of a campaign to inspire patriotism in a city where pro-Russian sentiments and nostalgia for the Soviet Union still simmer beneath the surface. Billboards encouraged citizens to report separatist activities to Ukraine’s intelligence services, an appeal that seemed uncomfortably Orwellian in a country working to expel all vestiges of its Soviet past.

At the club, we found a table and ordered drinks. I drank whisky and colas. My new Ukrainian friends got a kick out of the fact that I ordered whisky, dutifully living up to the American stereotype.

None of them ordered vodka drinks, however, challenging my own stereotypes. Most Ukrainian millennials prefer craft beers and mixed drinks like mojitos—vodka is stigmatized as belonging to their parents’ generation.

I was the first American some of these young Ukrainians had met. Yet, they were as familiar with my country as if I were the thousandth. They all spoke nearly flawless English, even dropping in colloquial slang and pop culture references. (“The Dude abides,” one young man joked, quoting “The Big Lebowski.”)

I felt like I was an expressly unexotic presence in a place that, at first glance, had so little in common with my home in America.

Russia and the U.S. have had a post-Cold War role reversal in Ukraine.

The generations that grew up in Soviet Ukraine were told for decades by the Kremlin that my country was the enemy.

Today, 25 years after Ukraine’s independence from the Soviet Union, Ukrainian troops are fighting a war against pro-Russian separatists and Russian regulars. And the U.S. is now the embodiment of the future of which many Ukrainian millennials dream.

Neon lights flashed and the hard-bass techno music thumped in the club. We stayed until late, but decided not to go home. Not yet. We left the club and walked along some empty, dirt roads, cutting through a path in the woods and down a metal staircase that descended a steep hill. Then we were on the beach.

The moonlight flickered off the tips of waves on the Sea of Azov. We walked along the seashore. Laughing, sometimes carrying each other on our backs.

I’m 34. My new friends are all in their early 20s. I felt like I was reliving a carefree experience from an earlier time. Later, as I reflected on the night, I realized that my presence was also a chance, for a night, for these young Ukrainians to recreate the carefree optimism of youth, which they had too little time to enjoy before the war began.

But our shared escapes from reality were interrupted. The echo of artillery rumbled in from the front lines in Shyrokyne, about 10 miles away. My friends acted embarrassed, like the war was a reflection on them, spoiling this special night they were trying to give me.

We walked up the beach until we came to a concrete pier. We hopped over a metal barricade and onto the structure. It was probably about  3 or 4 in the morning, but the pier was crowded with fishermen. The wind had picked up a bit, and the choppy sea broke around the pilings. A salty mist rose above us.

Walking to the end of the pier, we wove around the fishermen who silently fished with handlines and live bait. At the edge, we stood, looking into the void of the nighttime sea. If the artillery was still firing, we wouldn’t have been able to hear it. The sound of the wind and the waves drowned out everything but what we said to each other. We stood there for a while, not saying much.

I think we all felt that same sense of awareness and appreciation for the moment, which I had felt earlier while the night world streamed by outside the taxi window.

It was special because we knew it wouldn’t last. This was our own, one-night-long moveable feast.

My presence gave them a break from the war. And they reminded me that the story of this war, or any other, is so much more than a tally of bullets and bombs. It’s about lives interrupted, and how the war dims some dreams, while others are sustained by the stubborn hope that things will get better one day.

“I’d like to get married and start a family,” one woman told me. “But not until the war ends. This isn’t the world I want to bring a child into.”

Some had friends and family living in Russia, with whom they had severed ties over disagreements about Russia’s complicity in starting the war.

Dawn was coming; it was time to go home. We left the pier and went back to the road that skirted the shoreline. My new friends took a taxi, but I decided to walk back to the hotel.

I walked on the road until it turned inland and up a hill back toward the heart of Mariupol.

As I went away from the sea, the wind calmed and the world grew quieter. At the top of the hill I cut through a park. The predawn sky was starting to glow black velvet. The darkness heightened the sensitivity of my ears, and I could hear the breeze rustling the leaves of the trees.

And then it was there again. That unwelcome staccato bass thump of the artillery in Shyrokyne. It probably had never stopped. I could just hear it again, clearly and certainly, now that there was nothing left to distract me.